The Dashing Chronicles: Dirk’s mom deserves a parade... or a shrubbery 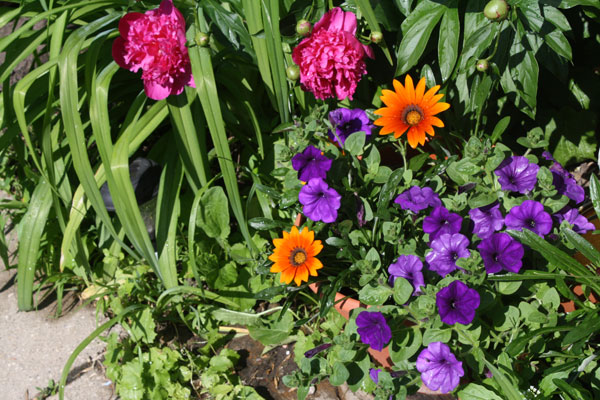 What did you get the mother in your life for Mother's Day? Flowers? A shrub? A card? Stock photo

There we were, touring the brightly lit avenues and boulevards of Saskatoon on a hot Saturday afternoon. There was no destination in particular and I desperately wanted to stick my head out of the drivers side window.

Why? I like the wind in my face, like a puppy imagining he can run like the wind without any of the effort. Or maybe like the Joker in that Batman movie when he busted out of jail. From the back seat of the car the Munchkin complains as I roll the window down, “Dad, that’s embarrassing!”

Well, one of us has to be the adult here. I guess.

Given that the next day is to be Mothers Day, I ask, “So, what did you get your mom for tomorrow?”

“I made her a paper flower bouquet,” she replies, “but I forgot it at school.”

One of us has to be the adult indeed.

A moment of reflection later she adds, “Dad, could we buy her something?”

My brain making processes kick into a higher gear and the smell of rubber appears from nowhere. A  thought asserts itself that: While I really don’t have to buy my ex-wife anything, it would be a harmless gesture.

“Well, what does she want?” I ask. Besides, when it comes to putting a smile on the  Munchkin’s face, the Dirkster cannot say no, he will not say no, and he cannot say no.

She cheerfully pipes up, “Mom said she would like a nail spa.”

Unable to resist making a joke I responded, “I didn’t know your mom has taken up carpentry. Hey, let's go to Canadian Tire. They have a section with bright, shiny nails and we’ll get her a nice pail-full.”

I can see her in the rear view mirror. The Munchkin’s expression is blank, as she stares intently at the back of my head. It’s as though she’s trying to puzzle out whether her dad is daft or truly clueless.

She plays is straight. “No, dad, I mean a place where they paint your nails and stuff,” and as she rolls her eyes she takes her gaze to the street outside.

Admittedly, I know nothing about nail spas, so I issued a plea on Facebook for recommendations. Some of the suggestions were promising. I was ready to pull the trigger but the Munchkin changed her mind. She wanted to get her mom flowers.

Easily done. Cradling the plant-terrarium thingy in her arms the Munchkin beamed at me, saying, “I’m really happy with this purchase, daddy.”

With a kind and soothing fatherly voice I patted her head and said, “Awe, I’m just being awesome, my girl.”

As I reflected upon this simple gesture of my usual thoughtfulness and overwhelming sincerity for my daughter, a familiar sensation welled up inside me. I call it decency, but I’ve heard others call it chivalry and heroism.

You may rightly wonder, from whence did this enormous and big sense of honour and stand-goodingly-ness come from?

I owe my adult-like character to my mother.

That’s right. Contrary to popular belief, Dirk was not delivered to this realm by angelic Viking princesses riding white Arabian war horses charging down a mythic rainbow of flowers and sunshine.

No, he has a real, human mother who made sacrifices and raised, dare I say it, the ever so humble writer that stands before you. Well, technically, I’m seated at my laptop, but she did in fact raise me.

She’s the true hero. Having grown up on the road allowance on the north end of my home reserve, she was wooed by a swarthy Cree athlete who would take her to see the world and help bring into this world four children…only one of which is worth mentioning.

Its sad, but my siblings are stunningly, boringly average. But she at least got one right.

So when you see her say, “Thank you so much for the inspiration that is your son, Dirk’s Mom.” That’s all you got to do.

Me? I helped buy her a shrubbery. ‘Cause I’m an adult. Or something.

Dirk says, I’m pretty sure mom will have mixed feelings about this month's column. Not sure the siblings can read, so no worries there.