The Dashing Chronicles: Fearless predictions for 2018

John L.: Apparently because I never learn, I have once again asked none other than Dirk Dashing to illuminate us on what to expect in 2018. Dirk, the world seems to have become a strange place. I’m glad to have you here. 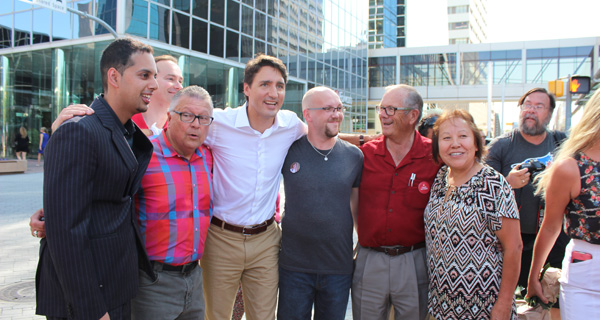 One of Dirk’s prediction for 2018: “Trudeau will continue to dangle shiny promises before us then tell us he cannot deliver until the next election. But he will do it nicely and we’ll buy it because we are so focused on his incredible hair.” Stock photo

Dirk: Thank you, John. Given the Trump factor, global terrorism, and Kanye West, the Trudeau government has decided to chuck 2018 and re-do 1964. Because of this there is no need to issue predictions for the coming year.

John L.: That hardly seems reasonable nor possible. Even if the Canadian government had a time machine 2018 would still take place, just like in that Michael J. Fox movie Monty Python and The Holy Grail.

Dirk: Um. Right. Well, I believe Justin Trudeau solved the quantum flux coefficient, that government does have such a time machine and that it works whenever and wherever Cabinet meets.

John L.: Alright, I am intrigued. How so?

Dirk: For starters, Trudeau and his peeps have resurrected the age-old practice of promising wonderful goodies to First Nation people to get elected then lofting insightful and legitimate excuses why the government must wait. But if you vote for us next time, well, just watch as all the wonderful goodies rain down like Woolworth’s condom mints from the heavens.

John L.: Wait, I think there is a typo in that last statement of yours, Dirk.

John L.: It’s ok, we’ll get that in editing. But to return to your claim that Trudeau government is being deceptive with First Nation people, do you have any examples?

Dirk: It’s a little known fact that I just imagined that in 1964, as part of its election platform, the first Trudeau government made several promises to help First Nation people, including snow-cone machines for the destitute Innu down in Innuvia.

John L.: Dirk, the first Trudeau government did not get elected until 1968, and there is no such thing as Innuvia.

Dirk: Don’t bother me with facts, John. It’s been proven in 79.35% of studies that facts can be used to prove almost anything, and they often get in the way of a good story…

Dirk: …and Innuvia did not exist in 1964 because we were still using the politically incorrect Eskimotania. We know better now, John. We’ve evolved. But most important? The snow-cone machines? They. Did. Not. Arrive…

Dirk [wiping a tear away]: …our poor Eskimo, Innu brothers and sisters had to rely on the gaudiness of nature to provide the their much needed and sacred snow, often finding themselves foraging in their back yards [Dirk sniffles, another tear drops]…those yards go on for miles, John. Or kilometres. I don’t know. John, it wasn’t fair.

John L.: Alright Dirk, get a hold of yourself. Let’s change the topic. What if 2018 was to happen? What could we expect in the world of politics for First Nation people?

Dirk [suddenly composed and lucid]: Well, Trudeau will continue to dangle shiny promises before us then tell us he cannot deliver until the next election. But he will do it nicely and we’ll buy it because we are so focused on his incredible hair.

And do not underestimate Senator Lynn Beyak. Between that vapid, empty smile and flouncy Walmart bottom is a heart of rabid yogurt just ready to race through your insides. She’ll be big in 2018.

Over in Canada’s basement, Trump will continue to bedazzle the public with his outrageous hillbilly comments and behaviour while he pursues his true agenda. But Oprah’s coming for him, so the battle that starts this year will be epic.

And globally, Duran Durant will make a surprising come back, updating Hank Williams tunes with the aid of Kanye West. But closer to home I will win a regional title in Scrabble having used your name, Mr. Lagimodiere, but cleverly sneaking in the letter X.

John L.: Of course you will. Dirk, thanks for your…strange and disturbing predictions. Good luck in the New Year.

Dirk: I was a pleasure, John. Thanks.

Dirk says, “Lynn Beyak has supporters. Sure all their oars are in the water, but on the same side of the boat!”