The Dashing Chronicles: What to do with those John A. Macdonald statues

John L.: In the past few months the debate in Canada has intensified over whether memorials to John A Macdonald should be torn down given his treatment of First Nations of this country. Here to comment is Eagle Feather News’ own Dirk Dashing. 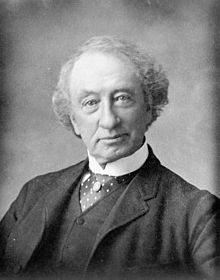 There is much debate over what to do with statues of Canada’s first Prime Minister, John A. Macdonald, given he was the architect of Canada’s residential school system. Photo credit: Wikipedia

Dirk: Yes, John, the legacy of Canada’s founding father has come under fire and it is dividing the country. Dividing the country like small town teenage girls getting ready to throw down outside the laundromat while their moms and aunties are playing bingo across the street.

John L.: Um, right. As I understand it people are questioning whether we should continue to celebrate the work of this country’s first Prime Minister. They want his statues torn down and his name stripped from streets, buildings and bridges.

Dirk: That’s correct. As a gesture of reconciliation that is sweeping this country First Nation people and many in the mainstream are demanding John A.’s miserable mug be pulled from public spaces.

John L.: And there are those who are saying to leave this country’s hero’s alone, that men like John A. Macdonald should be recognized for their accomplishments.

Dirk: John, this may make me unpopular, but I say keep his smarmy likeness public. Get some extra Turtle Wax and polish his name and superior face, like lipstick on a pig until it gleams in the harsh daylight.

John L.: I’m not quite following you, Dirk.

Dirk: That does not surprise me, John, for my mind is like ice on…um…a thing…that makes ice…kinda fast like, making it difficult for people like you to, y’know, finish your jigsaw scrabble thing…in time. I was going somewhere with that but lost the thread.

John L.: Ah, sure, Dirk. Now doesn’t this put you in the same camp the John Gormley’s of the world who argue, “enough with defaming of our founding fathers”, and it’s “politically correctness run amok!”

Dirk: Not exactly. Here’s the thing: in having his name and face emblazoned across the land, in this country’s public spaces, on its bridges and its streets, everyone – and I mean everyone, John – will be reminded this country was founded on his racist, genocidal, and drunkardly Aryan dream.

John L.: Sooooo. Anything new in your life? How are the kids?

Dirk: Yeah… Thanks for asking.

Dirk: Oh, hey, did you hear that pipeline got shot down by the courts?

John L.: Well, um, we are out of space,…and time. Can we pick this up next time?

Dirk: Of course we can. Or we can put it on that online web thing for your newspaper.

John L.: Yes, lets do that. Thanks again, Dirk, for your perspective and your time.

Dirk: I’ve been a pleasure, John. And you’re welcome.

Dirk says, John Randolph could have been talking about John A. MacDonald when he said, “He is a man of splendid abilities but utterly corrupt. He shines and stinks like rotten mackerel by moonlight.” I would add, John A. had a head like an over ripe dandelion and all the warmth of a fridge magnet.