Moe Morin is a freelance writer and photographer and the co-founder of Humans of Saskatoon. She photographs and interviews people and run their stories on her highly popular Facebook page. This month she talked to Cold War veteran Ray Sanderson about his experiences. Below are his unedited words. 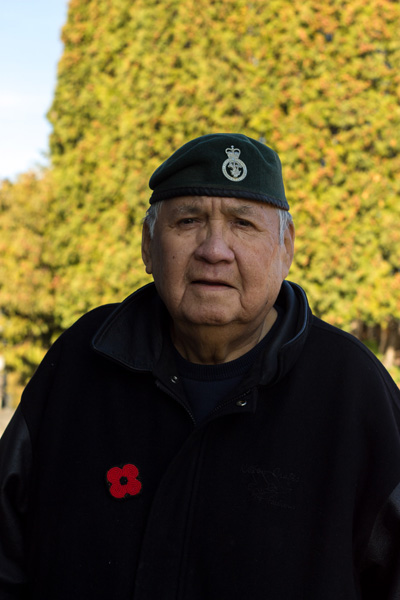 My name is Ray Sanderson, and I'm from James Smith First Nation. At a very young age I went to residential school like so many of our people, and I suffered in there. I remember the loneliness, being lonesome for home. I suffered like this all of my life, and even while in the army, I was lonesome and couldn't ever figure it out. I spent 12 years at residential school, and this is how it affected me.

At 17 years of age I joined the Canadian Army, joining a regiment called The Black Watch of Canada. Right after basic training, I went overseas to Germany. One experience I'd like to mention was being an honour guard on the 20th Anniversary commemorating a battle that took place in Dieppe, France. The Dieppe Raid was a famous, ill-fated attack on a small French town that was controlled by the Germans, and the Canadian Army went in there thinking they might catch them off-guard. Somehow they found out, and many Canadian's were killed in action, wounded and taken prisoner. On the 20th Anniversary, I was part of these ceremonies, and the French people thanked us.

As I walked around, touring the cliffs where the bunkers were, I could see how they out manoeuvred the Canadian army. They slaughtered them. Those experiences that occurred during that raid against the Germans, valuable lessons were learned and were put to use in June 1944 to be successful on D-Day.

Going back to early army years, I eventually came back from Germany and transferred to PPCLI. Again, I was shipped to Germany. Another experience, in West Germany was in 1966. They were commemorating the 50th Anniversary of Battle of the Somme, and I went as an honour guard. It was a major battle in France during the first World War. Again, so many war graves.

One of the regiments that fought that battle was the Newfoundland regiment, that one morning when they went over the top to go into battle (when they come out of the trenches, walking towards the enemy they call it "going over the top"). 700 men went over the top, walking towards the Germans and again, they were slaughtered. The next morning, at roll call, some 67 or so men answered from the 700. These were very young men from Newfoundland, and most of them 16, 17 or 18 year olds. Two graves were of 15 year old men. Can you imagine? They made the ultimate sacrifice for their country and gave up their lives. Absolutely amazing.

What I found interesting about this experience, was that my Grandfather fought in the Battle of the Somme, his name was Patrick Brittian. He survived the war, came home, and was very quiet. We used to ask him, "what is war?" and he would say, "It's something dirty, and I don't want to talk about something so dirty." On his return home from WW1, he walked to see the Indian Agent, and asked about his benefits. They told him, "don't worry about it, you don't qualify anyway." I know I spoke to you about my Uncle Roddy Sanderson earlier, he fought in WW2, and after his return home at some point he found himself in Melfort, SK., on a cold winter night in 1955. He thought he would walk to the legion, and ask for something warm to drink until he could find a ride home. He was turned away, and was told Indians weren't allowed in the legion. They said, "Go home Indian, you don't belong here."

My uncle drank a lot, and we didn't know he suffered from PTSD. I looked after him for a time, and during the nights, he would scream in the dark from bad dreams. One night, he was killed while walking in a winter storm. How could they treat him like that?

Being in the army taught me discipline, how to look after myself, and be careful in how you treat people. I've learned through War, Elder’s, and going back to my culture, that whatever you do to someone will always come back to you.

I believe it is important to also teach school children what First Nation's veterans have contributed to our country, those of us that went to war. Some didn't come back, and they gave up their lives for this country. The people of Canada have to know we contributed a lot to this country; we went over and were prepared to give up our lives so that we could all enjoy this peace today.