Meet the cast of Reclaim 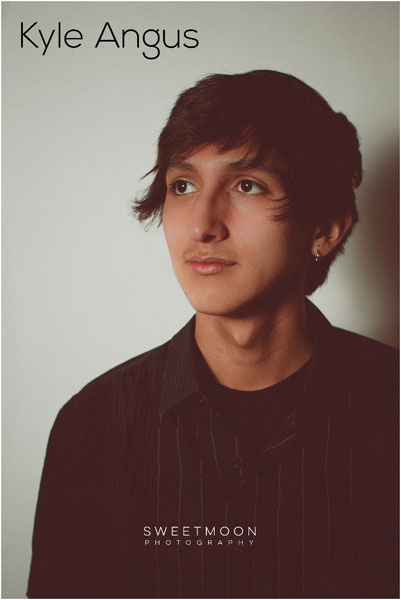 Kyle Angus is a 19-year-old Cree from Thunderchild First Nation. He is a fancy dancer who loves the pow-wow trail, enjoys music, art and reading.  For a post-secondary education, Kyle hopes to become an  electrician. Kyle joined up the Circle of Voices to discover his identity and hidden potential. He is looking forward to incorporating his story into Reclaim by Marcel Petit and performing in it. 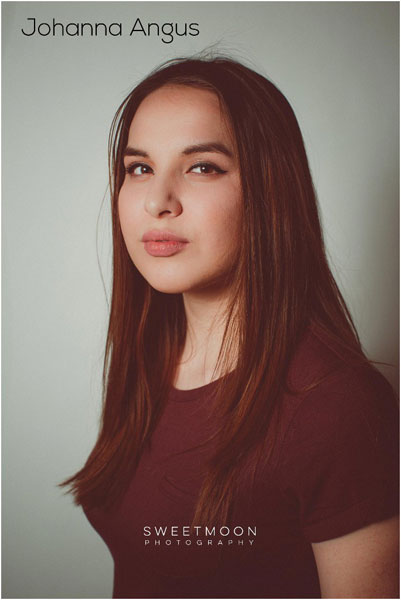 JoHannah Angus is a Saulteaux Cree from Thunderchild First Nation. She is 19-years-old and is currently completing her grade 12 at Oskayak High School. JoHannah has been dancing at powwows since before she could remember and enjoys participating in her culture. Since relocating to Saskatoon, she has immersed herself in as many opportunities for personal growth as she can manage to find. After completing the program, she plans on attending university to study Environmental Sciences to help her community. 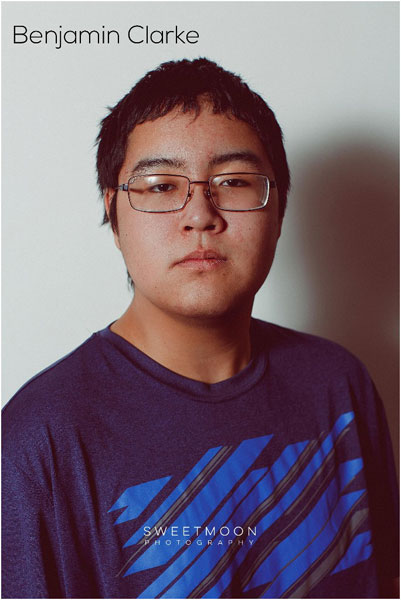 Benjamin Clarke is a Woodland Cree Native and a member of the Peter Ballantyne Cree Nation. Benjamin became interested in the arts when he moved to Saskatoon in 2013. As a person who's relocated many times in his young life and being a world traveller, Ben is flexible, adapts well and is a quick study. He began piano lessons in the fall of 2014 and is at the intermediate level. In 2015, he decided to try his hand in the performing arts. Ben has learned a great deal and is growing and developing his skills enthusiastically. Ben is full of surprises, while he may seem introverted and a little withdrawn, on the stage he becomes alive and full of energy. Ben will continue to grow and has much to offer his community. 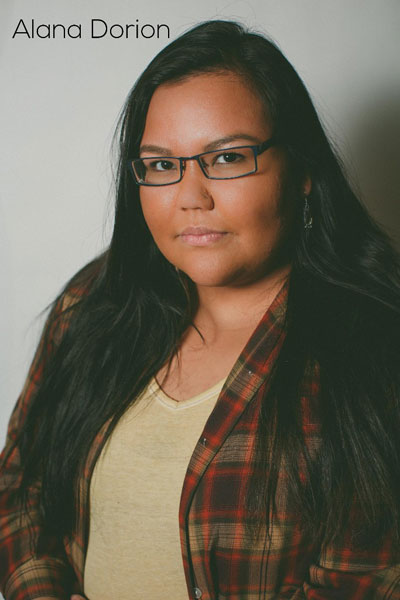 Alana Dorion, 20, from Pelican Narrows, has always had an interest in the theatre arts. She heard about COV from a couple of peers that had done it before. She plans on being a more avid person within the theatre community.  Alana is currently finishing up her esthetics course at MC College her in Saskatoon. She loves living life and is looking forward to whatever may come her 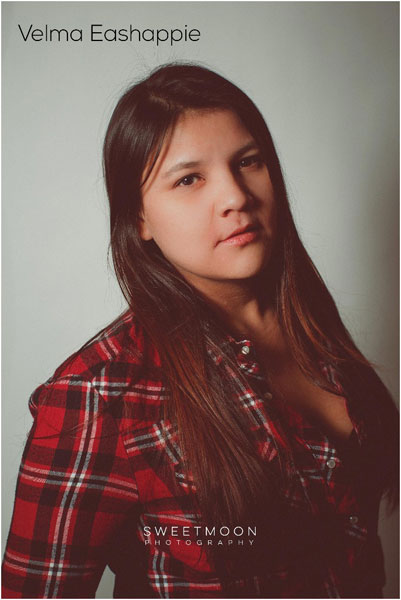 Velma Eashappie is 19-years-old and graduated from Oskayak High School in 2015. She is from Saskatoon and her various interests including: Boxing, MMA, getting involved not watching, reading, singing, watching movies, biking, socializing, swimming, and memory training exercises. 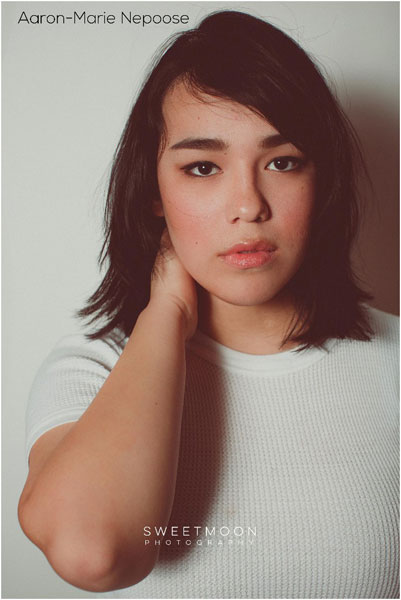 Aaron-Marie has performed in the traditional dancing arts for Queen Elizabeth ll when she was seven-years-old. She developed a taste for performing from this experience and continued in the arts from an early age. Her talents for singing, acting and storytelling were discovered through talent shows, school plays, political speeches and campfires. Aaron-Marie has a deep devotion for storytelling, which led her to the Circle of Voices youth program, where she has greatly enjoyed the learning experience. She perceives her future in which a path leads to beauty and harmony. Aaron-Marie is a 2015 Oskayak High School graduate, where her mentor Gabe Penna had taught her this, "To look at your feet when you walk is to shape your view of the world. To look at the trees and the sky when you walk is to see this amazing life." 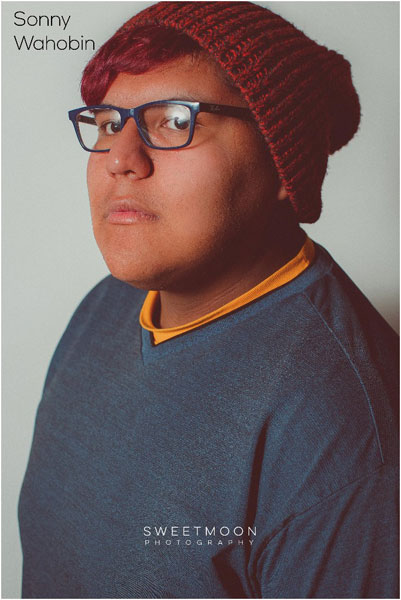 Carey "Sonny" Jr. Wahobin is from Mosquito First Nation. He is enrolled in Grade 9 at Centennial Collegiate. His sister, Patience, told him about the COV program and what to expect from it.  He is new to theatre. He opened up a little and got comfortable with everyone is the COV program, they're like family because of how long they have spent time together. When he's bored, he likes to sing a lot and goes on the internet. He enjoys playing sports like soccer, volleyball and basketball. When he gets older, he hopes of becoming a lawyer and going to the U of S for his law classes. He also hopes to graduate and get good grades. 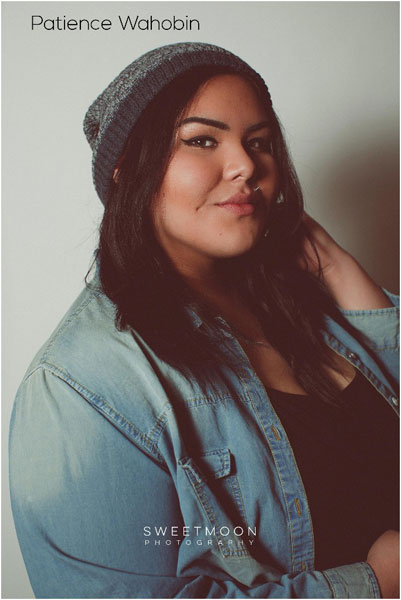 Patience Wapihkwanisis is a young First Nations student attending Nutana Collegiate. She is Sioux and Cree, from Waterhen Lake First Nations (Treaty 6 Territory). Patience first heard about COV in 2014 from school councillors, but unfortunately she wasn't out of her shell yet. October 2015 rolled around and she thought about applying. To her surprise, she got an interview! As the weeks went by, she got to know the fellow COV members and coordinators. She has learned a lot, not only about acting, but also about humility, character, and how to connect with people. Patience would like to personally thank Jennifer, Marcus, Curtis, Marcel, Anna, and the rest of the COV team from a wonderful five months. She learned a lot from this experience, thanks again.