The resignation of Commissioner Marilyn Poitras from the National Inquiry on Murdered and Missing Indigenous Women, Girls, Two-Spirited Peoples (MMIWG2S) has put the inquiry in peril. Poitras, an assistant professor at the University of Saskatchewan's College of Law, now joins a long line of executive and staff that have fled the Inquiry for one reason or another. She was the only Métis Commissioner. 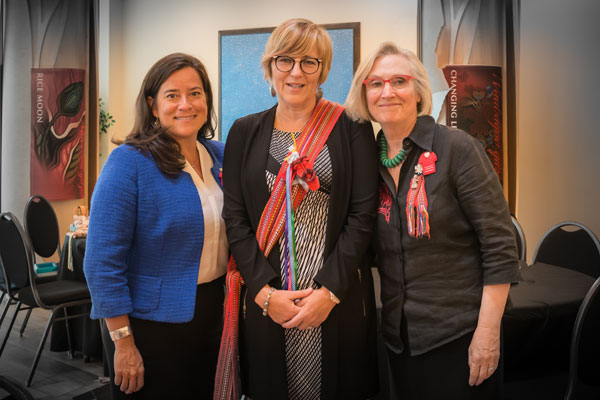 Justice Minister and Attorney General Jodi Raybould-Wilson on left and Indigenous and Northern Affairs Minister Carolyn Bennett on right pose for a photo with Commissioner Marilyn Poitras after the official launch of the National Inquiry into Missing and Murdered Indigenous Women and Girls.
Photo by Ted Whitecalf

In her resignation letter that was leaked to CBC, Poitras explained that she supports the idea of the Inquiry but is not comfortable with the process.

“It is clear to me that I am unable to perform my duties as a commissioner with the process designed in its current structure," she said in the letter to Prime Minister Justin Trudeau. “I believe this opportunity to engage community on the place and treatment of Indigenous women is extremely important and necessary. It is time for Canada to face this relationship and repair it."

The Assembly of First Nations was quick to respond.

“Our first thoughts are for the families of missing and murdered Indigenous women and girls and how this affects them and their path to healing and justice,” said National Chief Bellegarde. “We’re very concerned about this resignation because the work of the National Inquiry is too important and we want to see it succeed for the families. The AFN has made many offers to help the Inquiry connect with all those affected by this tragedy because a ‘families first’ approach is essential to the Inquiry’s success. As part of that effort, we’ve invited the Commissioners to speak at our upcoming AFN Annual General Assembly to share information, and we anticipate a positive response. Many of those gathered at the Assembly - Elders, youth, women and leaders – have been directly affected by this issue and will welcome this information. This resignation is regrettable but we thank Marilyn Poitras for her contributions.”

The federal government gave the commissioners a budget of about $53.9 million and asked them to complete their work by the end of 2018, with an interim report expected this November. The Commission recently announced the dates for the remaining gatherings for 2017. During the week of October 23rd, they will be in Saskatoon. Other locations from September to December 2017 include Halifax, Edmonton, Yellowknife, Smithers, Rankin Inlet, Winnipeg, beginning with Thunder Bay on September 10th.

Indigenous and Northern Affairs Minister Carolyn said the government will decide whether to replace Poitras after consulting with the independent commission, but stressed that it is important to have a strong Métis "lens" on the commission. She also pointed out the commission is independent and has a scope of work and a timeline to hit and there is a lot of concern that the inquiry will be scuttled.

"We are very aware of the concerns that have been expressed but we are also listening to families," she said. “A better communication strategy would help.”