Family walks for loved one whose disappearance now labelled homicide

Family and friends of Ashley Morin, a 31-year-old woman who went missing a year ago in North Battleford, began a walk on Friday, July 12 from Saskatoon to North Battleford to raise awareness for yet another missing Indigenous woman. 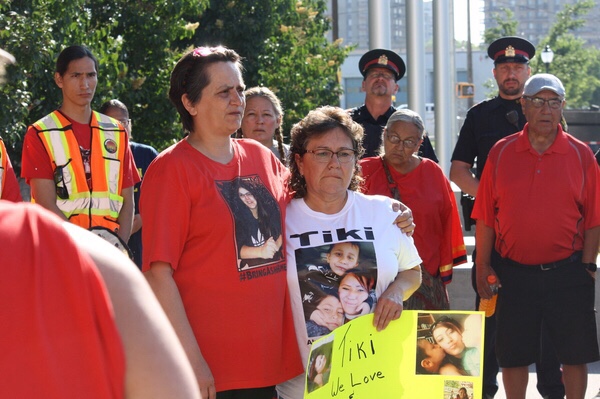 The walk began Friday morning in front of the Saskatoon Police Service (SPS), who committed to joining the walk in order to support the family and raise awareness. Family and friends of Morin, who was last seen on July 10, 2018, wore red t-shirts with a photo of Morin on the front, and bearing the hashtag #BringAshHome.

Morin is described as a beloved member of her family who was an all-star athlete and 5-time FSIN soccer champion.

“The heartbreak that I see, I wouldn't wish that on anybody,” said Krista Fox, friend and spokesperson for the Morin family. “We will not give up. We need to bring Ashley home. Whatever that may look like, we need to bring her home.”

The three-day walk covered over 130 kilometers. About 40 family and friends took part in the walk. A few days before the walk, North Battleford RCMP announced that they have discovered human remains outside the city. The missing person investigation will now be treated as a homicide.

Joining the walk was also family of Tiki Brook-lyn Laverdiere, a 25-year-old woman from Thunderchild First Nation who went missing on May 1 from North Battleford. Both Laverdiere and Morin investigations are being treated as homicides.

“The behaviour over the last couple days of the RCMP (...) who have not contacted the community for the past year, then three days ago let them know their opinion of the investigation being a missing person through homicide – to me, in my opinion, it was an ass-covering exercise,” said Cree elder Eugene Arcand.

“The shameful behaviour of the RCMP in this past year, as it relates to this family right now, to me is unforgivable,” said Arcand. “The system has tried to destroy my people and destroy me.”

Arcand also likened the RCMP's operations as they relate to Indigenous people as “frontier justice”.

A ground search last Thursday led to the discovery of human remains in a rural North Battleford area. A forensic autopsy is scheduled for next week to identify the remains. The RCMP also released an image of a van believed to have been driven by someone responsible for Morin's death.

Police said none of Morin's cell phone, social media, or banking accounts have not had any activity since she went missing.

SPS Superintendent Randy Huisman, speaking on behalf of Chief Troy Cooper, said the walk should serve as a reminder for hope.

“We are still searching for answers and we will never give up hope,” he said. “We all remain hopeful that Ashley will be able to be found and brought home. Someone out there knows something.”

RCMP were not part of the walk. Rather, they are committing their resources to search for the two women.