Métis man from PA does his part to “Indigenize the Senate”

Politics can be a tricky game if you don’t know how to play it, but for eight youth across Canada, they got to do just that.

As a way of acknowledging National Indigenous History Month, the Senate Committee on Aboriginal Peoples invited eight youth to Ottawa for the 4th annual Youth Indigenize the Senate Day. 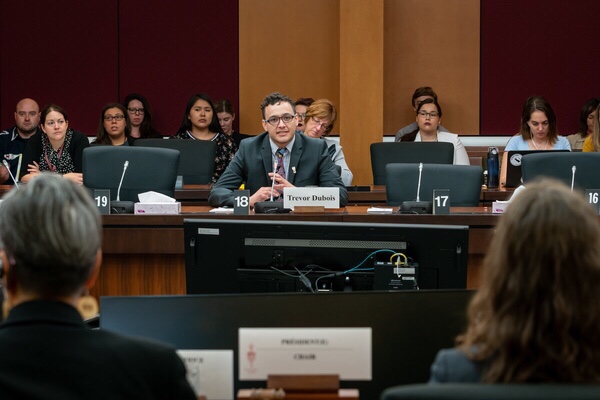 Trevor Dubois takes part in the fourth annual Youth Indigenize The Senate in Ottawa on June 5th. Dubois spoke about the various challenges he sees facing Indigenous youth and his hopes for a better Canada. Photo courtesy of the Senate of Canada

This year’s Youth Indigenize the Senate was held from June 4th to 6th.

The participants had a behind-the-scenes look at how Parliament works. They will also help the senators as they investigate new ways to bridge the gap between Canada, First Nations, Inuit, and Métis peoples.

During a public hearing, the youth got to share their ideas and experiences with the Senate Committee on Aboriginal Peoples

“Our committee is doing a study on what a nation to nation relationship looks like to Indigenous people and so we thought it was very important to hear what the youth think,” said Senator Lillian Dyck, who is an independent for the Liberal Party and is one of the senators attending this year. “They appear as witnesses in front of our committee. So, what they say becomes part of the official record of the committee and of the senate…when we do our report on what a new nation to nation relationship might looks like their voices become a part of that report. It’s their future that’s at stake so it’s really important to hear what they would like to have Canada look like.”

Trevor Dubois, a Métis man from Prince Albert, was one of the youth at this event. He was nominated by his boss because of all the work he does in their community.

As a way of helping his community, Dubois sits on numerous boards at the local and provincial level, works with non-profits, and has helped create social justice clubs, and daycares among other things.

“I think the world would get further if more people were like that,” said Dubois.

This was his first time being involved in this event and did not want to pass up the opportunity.

“I am very interested in social events and the impacts that being aware can have,” said Dubois. “Having an understanding of the different members within the committee and within the senate is valuable. It provides me insight into the people who are making decision that are not only impacting me but other youth.”

He added that bringing together all these youth from all First Nations and Indigenous backgrounds is an amazing way as it provides them with an opportunity to relay our point of views.

“Many times, they say you are the future leaders of tomorrow, yet we don’t have a say at the table or we’re not taken seriously,” said Dubois. “It provides us an opportunity to get to know, observe, and sit in important discussions and meetings.”

Dubois wants more people to participate and get involved in this event.

“I recommend other youth to apply, to experience, and learn from the smart intelligent leaders as a way of furthering them into becoming the same leader,” he said.