Hundreds upon hundreds gathered for a round dance in honour of the missing and murdered, at the new Saskatoon Police Services (SPS) building the first weekend of November.

“The fact that the SPS gymnasium is over capacity tonight reflects the excellent collaboration between the RCMP and SPS and community organizations,” said Myrna LaPlante, co-chair of Iskwewuk E-Wichiwitochik and a family member with two active missing persons files. She was grateful for the support and attendance. 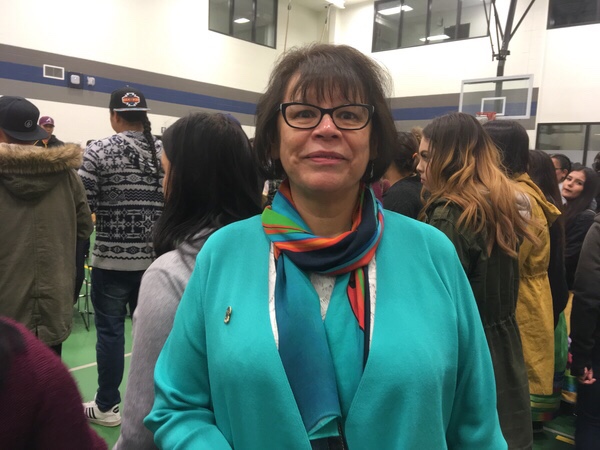 Myrna LaPlante of Iskwewuk E-Wichiwitochik, an advocacy group for MMIP who ran the concession at the SPS round dance.

“This is absolutely amazing to see this kind of turnout and it shouldn’t be surprising because the reason we’re all gathered here is to recognize and acknowledge the issue around missing and murdered Indigenous (MMIP),” said Chief Troy Cooper. “Everyone came out tonight in one of the oldest celebrations in Canada...it’s an amazing night and we’re so happy to host it here. This building was built for that, for the gathering of community, and it’s so nice to see it used for its intended purpose.”

The U of S Student Union held a round dance in the fall, but this is the first annual MMIP round dance, which came about through partnership with the RCMP. Inspector Honey Dwyer, in charge of the Aboriginal Policing Unit in Saskatchewan, said the RCMP needed to take affirmative action.

“I wanted to recognize all Indigenous missing and murdered persons, and I wanted persons because we have just as many missing men and boys out there, so this was us coming together,” said Dwyer. “It’s one step towards reconciliation, we’ve got a long way to go, but every step, we have to show we’re taking the lead.”

She credited RCMP Officer Karen Pelletier for partnering with the City and the SPS along with others, planning for eight months for the November Round Dance.

Saskatoon’s Mayor Charlie Clark echoed this, saying Pelletier’s vision combined with “fire in her belly” made sure the RCMP moved in this direction, working hard with the community.

“This partnership between the RCMP and the Saskatoon Police Service to host a round dance in honour and recognition of the ongoing work we need to do around the issue of missing Indigenous is very very important and meaningful,” said Clark, thanking the many volunteers and organizers, adding how important it is for the city to come together. “I want to recognize the family of Ashley Morin who is here today as a reminder of why we’re here...she’s a representative of too many who are still missing in our communities.”