Five visual artists in Saskatoon have created a multi-media exhibition to honour and draw attention to Missing and Murdered Indigenous Women and Girls (MMIWG).

Redsilient, a photographic rendition of Metis artist Jaime Black’s REDress Installation project, is the inaugural show at Chokecherry Studios in Saskatoon. Inspired by Black’s cross-Canada installations, the youth at Chokecherry Studios also sought to develop a project that draws attention to the gendered and racialized nature of violent crimes against Indigenous women. 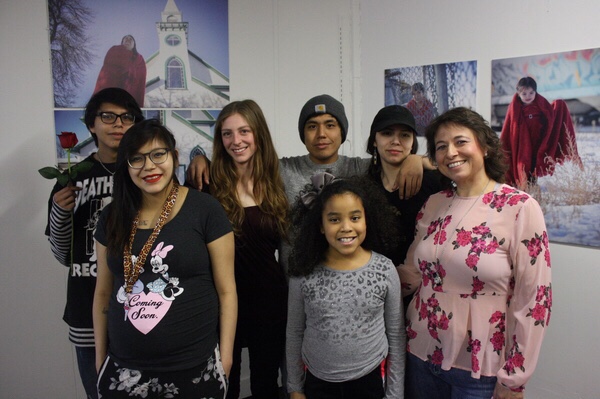 Andrea Cessna, Vicky Laforge, and some of the youth at Chokecherry Studios

Photographer and social worker Vicky Laforge mentored four youth – Kiyari McNab, Morning Thompson, Shania Thompson, and Kendra Poochay – to create a photographic series based some of their own first-hand experiences. Women are photographed in red, often near places where murdered women were found – forests, rivers, highways.

“It was a big deal to them. They’ve seen people get abducted, they’ve seen their friends approached for prostitution, living in poverty, or their friends themselves have gone missing. They all have stories,” said Laforge. “It’s been healing and they feel they’re making a difference because their photos are teaching something about what’s going on in Saskatoon.”

The project was titled Redsilient to celebrate the resilience of the human Indigenous spirit, said Laforge.

“We want to show what it means to be resilient. We’ve lost women. We’ve had murders. They’ve gone missing. But we are still resilient and we’re teaching others how to bounce back.”

Laforge said this has also been a healing project for herself, as her own parents were murdered in 2006 by a man who had abducted Laforge’s Aunt. Laforge believed the tragedy could have been avoided had there been an available women’s shelter. She has since worked with and been an advocate for women’s shelters, and likewise hopes that working with youth on projects like this can help restore strength to those who have lost loved ones.

“I want the youth to feel that they have the power to change something. They’re doing it by becoming stronger themselves,” she said. “It’s giving them an opportunity to talk about what they have been through.”

“Mentorship, storytelling, and social justice are the core values of the organization,” said Andrea Cessna, founder of Chokecherry Studios. “We’re trying to give youth the skill set or tools they need to do their own art projects – or help accomplish whatever goals they want to achieve.”

Redsilient, supported by FSIN and TakingItGlobal, runs until February 28 at Chokecherry Studios (204-A Avenue J South).