The 2016 mass shooting in La Loche that killed four and injured seven was committed by a youth, but a judge has ordered that he receive an adult sentence. 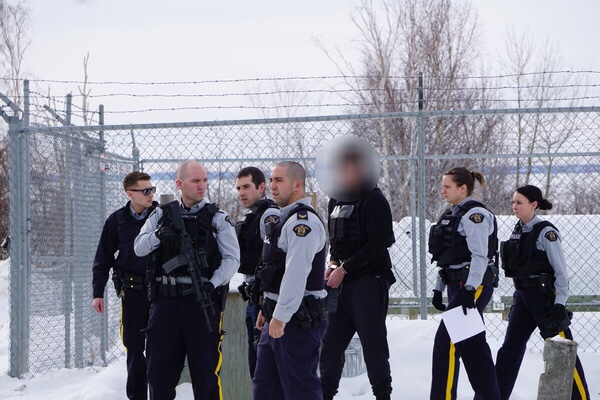 The La Loche rampage shooter, whose identity remains under publication ban, is escorted from court after court in La Loche on Feb. 23, 2018. Photo by Chelsea Laskowski.

Outside court, Crown prosecutor Pouria Tabrizi-Reardigan explained that, by law, an adult sentence for murder by a youth is a life sentence with no eligibility of parole for 10 years. Because the multiple crimes were committed by a youth, the sentence served cannot be consecutive. This means all sentences are served over the same period of time.

”There’s not a whole lot of wiggle room with an adult sentence,” Tabrizi-Reardigan said.

The male was weeks from turning 18 when he went on a shooting spree at the high school and a home in the community on Jan. 22, 2016. Judge Janet McIvor’s Friday decision for the 20-year-old, which included a continuation of the publication ban that keeps him from being named, was met with applause in a packed La Loche courtroom.

“The planning, the deliberation, the resolve, all have an adult-like quality,” Judge McIvor told court. The details of the adult sentence will be decided at an unknown later court date.

Both victim and offender family members were present, which led to a split response, said La Loche Mayor Robert St. Pierre. Community members spilled outside court right after the decision was made, with many wiping tears from their eyes and pausing briefly to hug each other.

It was an emotionally charged day for all La Loche residents as the offender was present in La Loche for the first time since the shooting spree that took the lives of teen brothers Dayne and Drayden Fontaine, teacher Adam Wood, and educator Marie Janvier. The offender was flanked by RCMP officers who carried carbine rifles as he entered and left court. Court itself was subject to extreme security measures. Eagle Feather News was unable to witness his or any other courtroom reactions to the adult sentencing decision because all but one reporter was locked from the building during the sentencing. Due to the issues, media was later provided access to the audio of the sentencing decision for transcription purposes.

McIvor ruled that prosecution had met the required standard of finding the offender to be morally culpable for his crimes and finding that a youth sentence would not hold him accountable.

“This young person was the sole architect and perpetrator of these crimes,” McIvor said.

Among her considerations based on prosecution’s submissions were that: the crimes were preplanned dating back to September of 2015; that the offender had capacity for planning, moral sophistication, and resolve to commit the crimes; that mental illness was unproven; and that his actions were his and his alone. McIvor rejected the defence argument that the shooter had significant cognitive problems, development issues, resulting behavioral problems; that the education system in La Loche failed to address his needs; that he mental illnesses of depression, anxiety and fetal alcohol spectrum disorder; and that marijuana use had impaired his reason.

McIvor referred to the murder of Drayden Fontaine, 13, as “utterly senseless,” but because the offender saw Drayden as an obstacle to shooting up the school, he killed him.

She said the offender has showed a lack of remorse for his actions at the school as well as a lack of motive for his crimes. Dealing with these issues, McIvor said, will take time and a youth sentence would have meant after six years in custody and four years supervised, it wouldn’t matter if his risks hadn’t been managed because he would be a free man under the law.