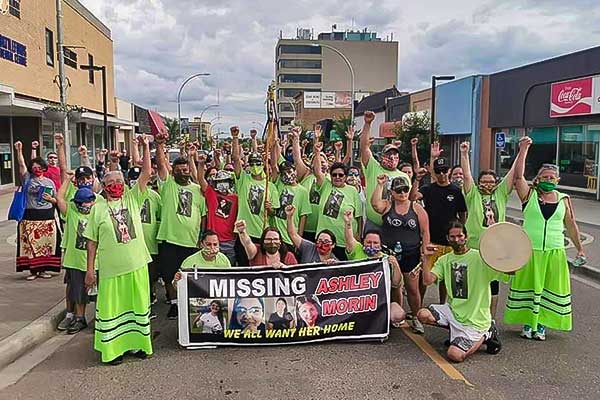 Family members and friends of missing person Ashley Morin took part in the second annual walk between Saskatoon and North Battleford from July 10 to 12 to raise awareness. A ground search will take place from July 24 to 26, 2020. Photos supplied by Janine Morin

Family and friends of missing person Ashley Morin completed their second annual walk from Saskatoon to North Battleford on July 12.

“We did our first one on the first anniversary of Ashley’s disappearance — she was last believed to be seen July 10th,” said spokesperson Krista Fox. Fox, a close friend of the family, who has since been adopted as a daughter by Ashley’s mother Diane Morin, noted that things were a bit different due to Covid this year.

“Last year we were able to camp on the side of the road but this year we just walked until it was dark and drove home and began our second and third days after resting at home.”

The three-day walk, just over 140 km, started out strong in front of the Saskatoon City Police station with at least 40 people and generally had 12 to 18 family members throughout the extended walk, Fox noted, adding that there were also cars driving with them alongside a constant police presence.

“The reason we do it is to remind people that we are still looking, that our Ash is not home but that we haven’t given up. She’s not a statistic, she’s not a number, she’s not just a First Nations woman that’s gone missing — she’s a daughter, a grand-daughter, an auntie. We don’t want anyone to forget what her face looks like, or her beautiful smile. We need to keep her story out there,” said Fox, adding that although a lot of blood, sweat and tears goes into the walk, there’s a reason. “She’s loved and missed and we will never give up until we can bring her home.”

The family didn’t stop with the end of the annual walk.

Fox spoke to EFN en route with Ashley’s sister, mother, and grandmother to surprise a walker who is going from Saskatoon to Regina alone to bring Ashley’s story to the Legislature.

After that, they will settle in to finalize the details for a ground search, which is set to take place in the North Battleford and surrounding area, with support from Prince Albert Search and Rescue and tracking dogs from Lloydminster, on the weekend of July 24 to 26.

“We believe there are people responsible for her disappearance, so if she’s somewhere we’re able to find her, we will,” said Fox. “We’re hopeful we can do a good, organized search of our surrounding areas and see if we can come up with something.”

Dorthea Swiftwolfe of Saskatoon Police Services Victims Services Unit has been supporting the family since she met them in October of 2018, during the annual Sisters in Spirit vigil.

“We walked from Saskatoon to North Battleford, and it’s a very difficult journey but the sore feet, the sore legs, the sunburnt skin, is nothing compared to the pain of the family — so we walk together for strength, for awareness, to support one another, to embrace each other’s tears,” noted Swiftwolfe, who has been adopted as family as well. “All families that have a missing loved one need community support.”

Through funding from SPS Victims Services Unit and Sask Justice, signs were made to mark every 10 km walked between the two communities.

“We will not give up,” said Fox. “That is our message - to let people know that we won’t give up on our beautiful girl and whatever the circumstances are, we need to bring her home.”