Athabasca Basin Security recently received the 2018 SABEX Growth & Expansion Award given by the Greater Saskatoon Chamber of Commerce. The Award acknowledges those businesses in the greater Saskatoon area that have achieved a level excellence in business through the Saskatoon Achievement in Business Excellence Awards (SABEX). 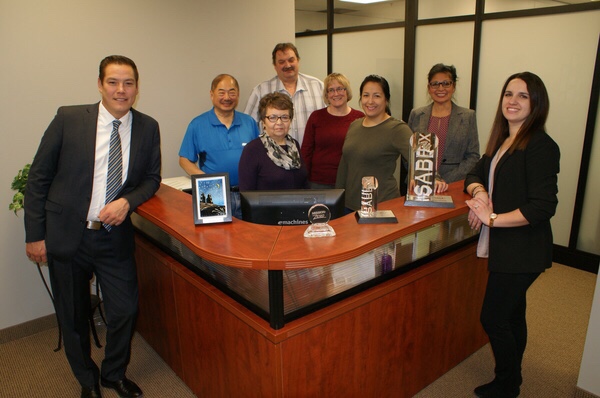 The winners of the SABEX award for Growth and Expansion, Athabasca Basin Security.

The SABEX Growth & Expansion Award is presented to the business that “has made significant changes in their business resulting in growth or expansion of 15% or more of business markets, physical locations, number of employees and which in turn has made an impact on the company’s overall ability to increase its revenues, investments and profits now or in the future.”

“It is a great honour to be recognized by the Greater Saskatoon Chamber of Commerce as this years’ recipient of the Growth & Expansion Award,” said Athabasca Basin Security CEO, Ron Hyggen. “I am very proud of the hard work and dedication that my team has shown as we continue to grow, diversify and expand our footprint across western Canada.”

Athabasca Basin Security LP is known as a respected leader in the security industry and has provided the mining industry’s top companies with industrial security and medical services in some of Western Canada’s most remote areas.

Established in 2002, with only fourteen (14) employees, Athabasca Basin Security today has grown to employ a workforce of 340 employees, with many of the employees coming from First Nations and rural areas.

In the past eighteen months, The Company has expanded their portfolio to include contract medical services through Athabasca Basin Medical in 2016, and All Peace Protection in Grande Prairie Alberta in February of 2017.

Athabasca Basin Security is an Aboriginal-owned, award winning company that continues to set the bar in the industry by focusing on the need for compliance, safety and communications between the ABS team and their clients.

In the past twelve months, Athabasca Basin Security has been recognized as a Finalist in the Mission Zero Awards program in the Large Company Category for their strong commitment to safety in the industry, and as a Finalist for the ABEX Awards for Growth & Expansion.