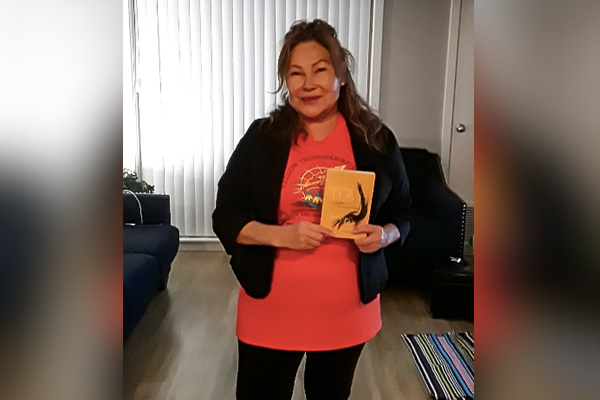 Orange Shirt Day, which honours those who attended Indian residential schools, is celebrated throughout the nation on September 30.

It’s also a day when residential school survivor and author Bevann Fox reflects on the colonization and genocide of that system.

The new book is fiction but based on true events said Fox, who presented herself as Myrtle in the book. “Writing about Myrtle was easier (than writing a first person account of the) tragedies that happened in the residential school.”

The title refers to the genocide that occurred in the residential school system.

“That was the government’s (intention,) to kill the Indian in the child,” she said.

The book has received good reviews. People tell her that after reading the book they cried, laughed, were angry and happy. Fox says the book is traumatic yet incorporates humour.

“What I wanted for this book is to take people on a journey and (for them) to be left with hope,” she said.

Fox was sent to the Lebret residential school in the mid-60s when she was seven years old.

“I was so excited to go to school,” said Fox. “I (thought) I was going to meet the Queen in my young child mind. The first day was when I first got hit. I was told to change.”

Fox endured years of abuse at the residential school. She witnessed different forms of abuse on others as well as herself.

“We were given an orange before bed,” she said. “There were many times I went to bed without that orange. I wasn’t allowed to eat supper or have an orange as a form of punishment. That was a big significance for me when I think of Orange Shirt Day, it has a lot of meaning,” she said.

Fox embraces Orange Shirt Day because she survived residential school, though others did not, she says.

“It’s a very special day. I think to myself ‘I’m still here.’ I have children and grandchildren… some didn’t make it out of residential schools,” she said.

Fox holds a Master’s Degree in Administration Leadership from the University of Regina and is currently working towards a Ph.D.