Back to Batoche brings culture and good news

The 49th annual Back to Batoche celebration was a resounding success from start to finish. Hard to argue when the opening ceremonies included announcements on initiatives including housing, education, safety and justice for Île-à-la-Crosse residential school survivors to kick off three days of culture and honouring of the ancestors. 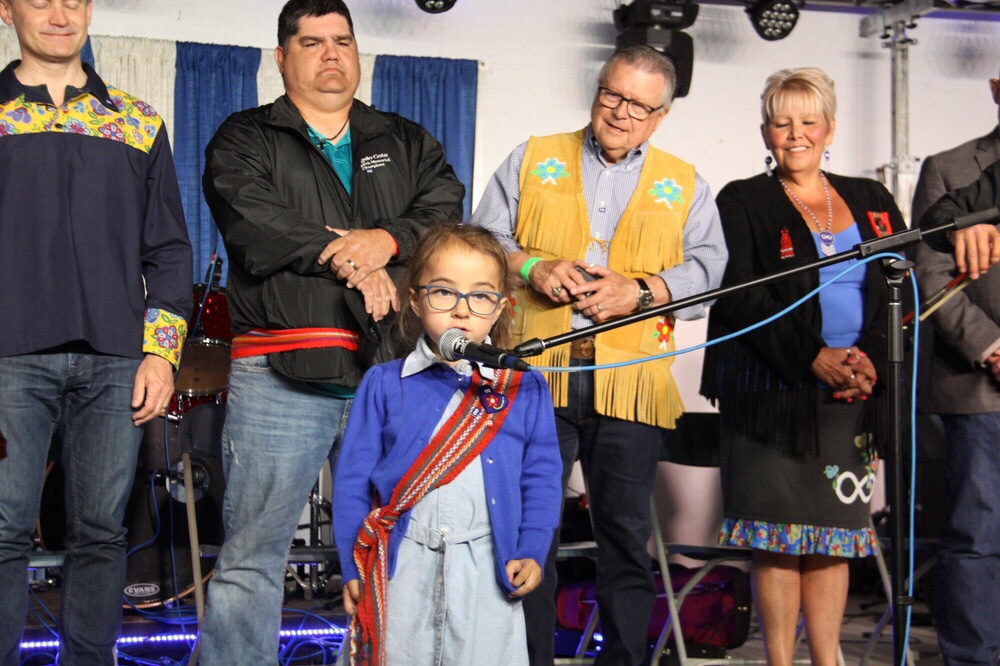 Maya Hoskins-Fiddler captured the heart of the people with her rendition of the Métis National anthem to open Back to Batoche 2019.


Maya Hoskins-Fiddler kicked off the event with a heart-warming rendition of the Métis National Anthem and then it was into the good news. The Île-à-la-Crosse Steering Committee and the Métis Nation of Saskatchewan signed a Memorandum of Understanding with the Honourable Carolyn Bennett, Minister of Crown-Indigenous Relations to begin to collaboratively chart a path forward to address the legacy of the Île-à-la-Crosse Boarding School. Through this process, the parties are hopeful that options can be agreed upon and supported, including addressing the immediate needs of survivors.

"This has been a heart-wrenching journey for our survivors and families of those students who have passed. We have had promises from other governments over the years that never came to fruition and we approach this with cautious optimism. However, we have built a respectful, honest relationship with Minister Bennett and officials and we have achieved respect in several areas and I expect we will in this as well," said Glen McCallum, MN-S President.

Île-à-la-Crosse boarding school was operated by the Province of Saskatchewan and the Catholic Church from 1906 to 1976. Former students of the school were not eligible for compensation under the Indian Residential Schools Settlement Agreement, as the school was never federally operated or administered.

Former Île-à-la-Crosse students filed a class action against the Government of Canada and Province of Saskatchewan in 2005. Plaintiffs allege that both governments are responsible for the sexual abuse, physical abuse, cultural abuse, isolation, and mental and emotional abuse that former students endured while attending the Boarding School. 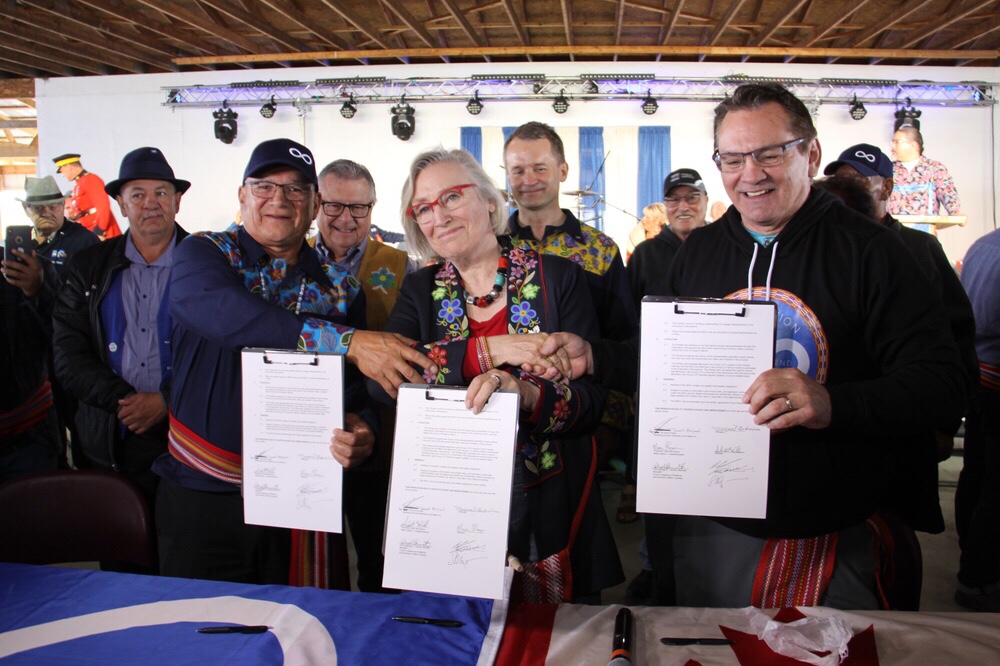 President Glen McCallum, Minister Caroline Bennet and Leonard Montgrand at the signing of the Île-à-la-Crosse MOU.


"The mistreatment of Indigenous children is tragic and unacceptable. Today marks a first step toward seeking justice and healing for former students of Île-à-la-Crosse and making amends for past wrongs against the Métis. We look forward to opening the dialogue with the Parties toward addressing the legacy of Île-à-la-Crosse boarding school," added The Honourable Carolyn Bennett, Minister of Crown-Indigenous Relations.

Speaking of students, a big leg up was offered to current and future ones. President Glen McCallum and Minister of Education Dr. Earl Cook announced a new 10-year, $89 million post-secondary fund specifically for Métis students. The new post-secondary fund provides direct financial support for Métis post-secondary students in the form of tuition, books and living allowance. In addition, the fund will support student services and increase education governance capacity at the post-secondary level. Student funding and services will be delivered primarily through Gabriel Dumont Institute (GDI) of Native Studies and Applied Research (GDI) an arm of MN-S.

“As the education arm of the MN–S, GDI is widely recognized for its capacity and its reputation for providing services to the Métis of Saskatchewan and creating awareness and sharing knowledge on Métis history, culture and education,” said Dr. Earl Cook, Education Minister and chair of Gabriel Dumont Institute Board. “There is so much research that correlates post-secondary education as a critical factor in closing the socio-economic gap between Métis and non-Indigenous populations.”

Next up was housing. In partnership with the Government of Canada’s National Housing Strategy, the MN-S announced a new program to assist first-time Métis homebuyers and promote home ownership. Citizens who qualify will be able to access up to $15,000 towards a down payment, and up to $2,500 for closing costs, if they own the home for at least 10 years. They will also have access to professional advice from realtors, lawyers and mortgage brokers through the home buying process.

“Home ownership for many Métis citizens has not happened due to a multitude of government policies that perpetuated crippling poverty. We recognize this and have worked with the federal government on proactive specific actions which will uplift Métis families to invest in their futures through home ownership,” said Derek Langan, MN-S Housing Minister. “Having a secure, stable home to go to is important for families on so many levels, including mental and physical health, as well as building wealth. This is a hand up for our citizens.” 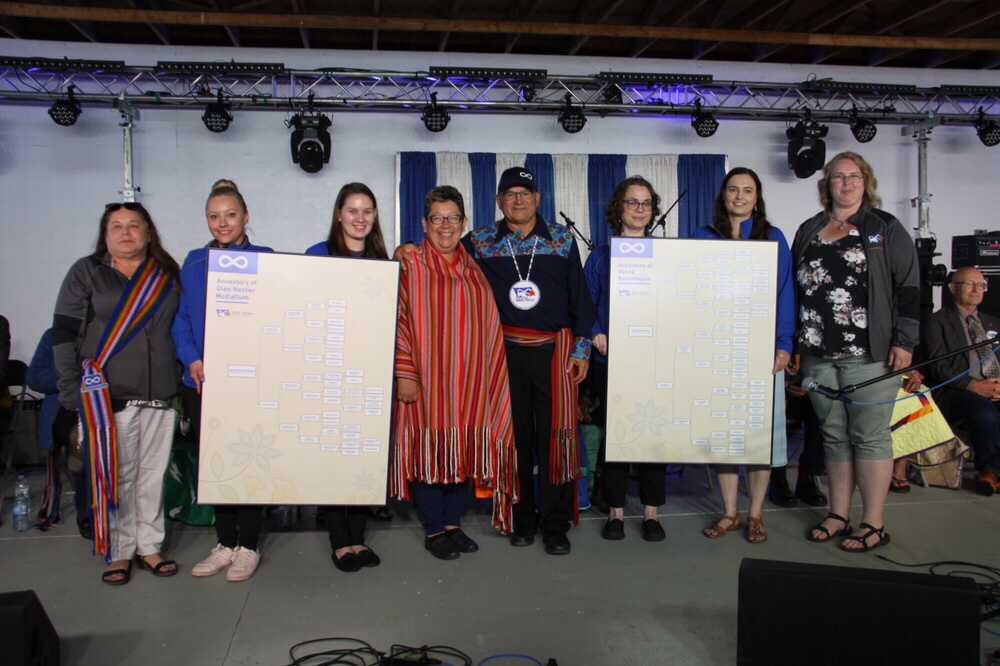 President Glen McCallum and his wife Verna received a special presentation of their families genealogy from the Provincial Citizenship Registry staff.

The opening ceremonies were topped off with another MOU, this time with the RCMP. Royal Canadian Mounted Police “F” Division and the MN-S agreed to continue the work of building trusting and mutually beneficial relationships between Métis citizens in Saskatchewan and the RCMP. The protocol stipulates that the RCMP will recognize MN-S as the government for Métis citizens and affirms the need to work together to build stronger, safer communities.

Following a presentation from the Citizenship Registry to President McCallum and his wife Verna of their genealogy, three days of culture, visiting and celebrating the land and Métis history commenced.