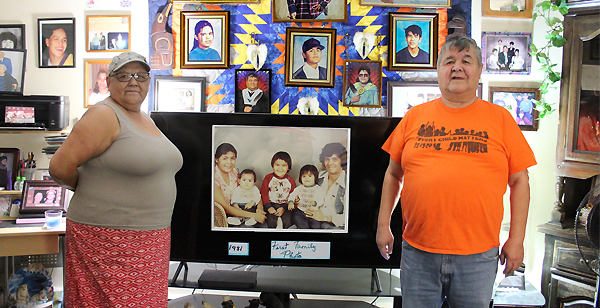 Frank and Barb Badger lost their children Earl, Leora and Frank jr. in a car accident around Christmas 25 years ago. They have turned that pain into healing and community service. Photo by Errol Sutherland

Barb Badger recalls a disconcerting experience like it was yesterday. She was working in her kitchen when a strange sensation overcame her.

“It was about 6:15. I remember it so clearly. For a few seconds I got so lonesome. I felt like crying,” she says, speaking softly. “It only lasted a few seconds, then it was over.”

Not long after this unnerving episode, husband Frank arrived home and the couple prepared to go for supper at the home of Al and Vi Burton in Codette.

It had been a pleasant evening with close friends until the phone rang, just as Frank and Barb were getting their coats on to leave.

“Vi got off the phone and she seemed a bit jittery,” Barb says.

The Badgers agreed to stay for one more cup of coffee. Less than five minutes later the doorbell rang. Two RCMP officers, faces drawn tight, politely asked to come in.

“I recognized Brian from the hospital in Nipawin where I worked. An uncomfortable chill came over me and I thought of Mom and Dad,” Barb remembers, as she attempted to put unpleasant thoughts out of her mind.

“What did I do this time?” Maybe it was that unpaid parking ticket.

The Mountie took a deep breath.

“Mrs. Badger, there has been a car accident. It was a little red Hyundai. The three occupants didn’t survive. They are all deceased.”

At that moment, life as they had known it, the one with three beautiful, happy children, thriving in a healthy home, ended.

“I fell against the wall. I couldn’t cry because I was in so much denial,” Barb explains.

“I needed to get some air,” Frank remembers, heading for the door. “The officer didn’t want me to, but I wanted to be alone.”

The officers presented the shocked parents with a wallet, belonging to their son, Earl, who at 17 was the eldest and had been the driver. A student card belonging to Leora, 15, was also found in the wreckage.

The car had hit black ice, spun and was struck by an oncoming truck. The three children, Earl, Leora and the youngest, Frank Jr., 14 had died instantly.

The accident occurred at about 6:15 on the highway not far from Prince Albert where the kids were headed to visit their aunt Linda.

It was Dec. 21 and the next days were a blur, as Frank and Barb prepared for a service to be held at Beardy’s and Okemasis, near Duck Lake.

The grieving couple endured a nightmare that no parents could ever prepare for, beginning with a visit to the hospital in Prince Albert to confirm the identities of the bodies – a task that Sam Badger undertook.

“I remember (Sam) saying, ‘It’s okay, I can do this,’ and I remember him carrying sweetgrass. I never prayed so hard; don’t let it be my kids.”

When Sam Badger returned to the family, gathered in a waiting room, he simply nodded his head. Frank fell to the floor. Barb went into shock. The tears began. The nightmares.

So, too, began the remarkable healing process.

Supported by Barb’s parents, Elder George Benson of Red Pheasant, and many friends from Saskatchewan and beyond, Barb and Frank began a chapter in their life that is truly inspiring.

It began at the funeral service at Beardy’s and Okemasis, the community not far from One Arrow, where Barb grew up.

Unable to view the children in their open caskets, Barb struggled to contain her grief.

Speaking in Cree, her father, Edward Baldhead said: “Oh, my girl, you have to pay our respects to your son. Open your eyes,” the respected Elder said softly.

“So, I did, and we placed letters to the children in each of their coffins.”

Barb doesn’t recall precisely what they wrote, but among the words was this striking message to the kids: thank you for choosing us to be your parents.

To be sure, there were difficult days, weeks and months ahead, but the couple persevered.

Acceptance and understanding began slowly, but it came.

“I was angry, what was there that I could take out of this that would be positive,” Barb asked in the early days following the tragedy.

“The Creator doesn’t give you something you can’t handle,” he told them. “You’ll know what it is later on.”

Frank and Barb first spoke at a workshop at the Ping Grove Women’s Correctional Centre, sharing their wisdom and inspiring the audience. Other invitations began to flow in and the Badgers accepted, certain they were doing “our kids work.”

“We don’t like calling it our story. It’s our life. This is reality,” Barb explains.

“It brings us closer to our kids. Your greatest gift from your Creator is your kids,” she adds.

“I have no regrets the way I raised my kids. No alcohol, respect, good value system,” Frank says.