The cities of North Battleford and Battleford, along with some surrounding First Nations, have come together as one big community in their “Sacichawasihc relationship agreement” signing ceremony.

“It is a government to government framework of municipal and Indigenous government in and around the Battlefords area,” said Ryan Bater, the Mayor of North Battleford. “The framework is meant to provide a means by which our governments can come together to address areas of mutual interest and concern.” 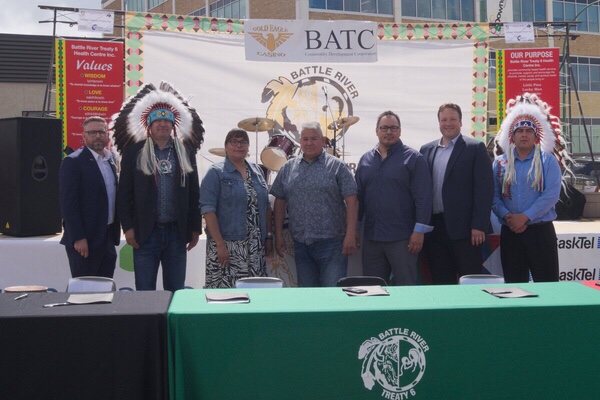 This initiative started in 2018 when Bater invited chiefs from the surrounding Indigenous communities and Battleford to a meeting where there was no agenda to talk about the different challenges the area faces as a region. It was decided they wanted to work towards this initiative so they all met four times, and each addressed different issue they wanted a part of it.

Laurence Paskemin, Chief of Sweetgrass First Nation, thinks this is a good first step to get leaders working together.

“We don’t work in isolation, neither do we live in isolation. So, what affects us is going to affect our neighbor,” said Chief Paskemin. “So, it’s important we work together which comes from our spiritual teachings from our elders.”

Those involved with the signing hope it gets the attention of the provincial and federal governments.

Bater feels many issues cannot be properly addressed without the help of the other branches of government.

“We have recognized as a region we have a variety of challenges...and in order to address them appropriately we need to align the four orders of government that have a presence here…so this is the beginning of that we are aligning the municipal and Indigenous orders of government with the hope of being able to attract the provincial and federal levels of government to work with us as well,” said Bater.

“It’s no longer a city initiative. It’s a regional initiative, and we are in this together,” said Bater.