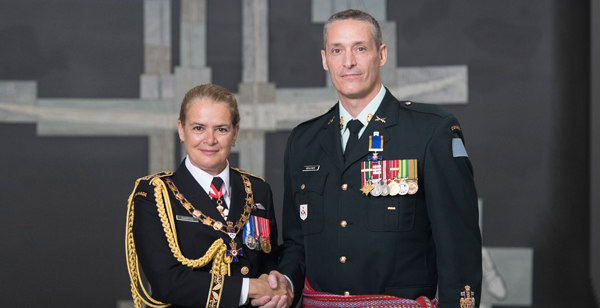 Albert Boucher has military in his blood. From having ancestors fight at Batoche against Canadian soldiers, a father who was an engineer in the reserves and with two older brothers who both were in the North Saskatchewan Regiment, it was natural to him that he would enlist in the army reserves in 1983.

The irony of his family fighting Canada and for him now serving for that same nation is not lost on Boucher. He embraces it.

“The North Saskatchewan Regiment first Battle Honour was from the North West Rebellion. My family fought against this unit on the other side. Our last Battle Honour was for Afghanistan, I was one of the many soldiers deployed from our unit that helped earn it,” said Boucher. “Our family history is wrapped into the tapestry of Canadian history. I have always enjoyed that. I think it is kind of amazing really.”

Albert learned to love the land from hunting with his dad, Ray, and his cousin, the late Métis Nation-Saskatchewan Senator John Boucher, near St Louis.

“My dad and John B were close; they would hunt together. Dad even had a little shack on his land that he would live in for a couple weeks during hunting season,” remembered Boucher. “We were out one time when I was about 12 and they were teaching me how to track, telling me to get down low and sniff the track…those two were just laughing away, funny guys.”

The Army reserves are part time work, but they have taken Albert around the world and all the way to the position of Chief Warrant Officer in 2010. CWO is now in the position of Army Reserve Sgt Major, the highest-ranking Non Commissioned Officer there is.

“The military gave me experiences and challenging ones. Leadership experience. To motivate people to function in difficult and austere conditions that are physically and mentally challenging and to thrive in that environment. You don’t just pass through. You must be part of the environment. When you are on an exercise you are immersed into it,” said Boucher.

“You are part of the bush. You must blend in. You know what the smell of dirt is. You can smell sage when you are crawling up to it. You know the smell of different grasses. I loved crawling around and all of a sudden you are face to face with a deer or squirrel. Mainly I go to meetings now and sit in boardrooms. But as a young soldier in the first 20 years, it was awesome being out there.”

He has also excelled in his day job in corrections where he has served as a guard, trainer, assistant warden and is now a manager at the Regional Psychiatric Centre in Saskatoon.

Both of his careers have led him to adventure. He has been in 22 countries, all but one province and territory, 140 feet below the ocean surface and 14,000 feet above the earth for a skydive.

He was also deployed to Afghanistan for Operation Athena in 2004 and 2008. “In 2008 I was the Camp Sgt Major of Kandahar Airfield. We conducted the ramp ceremonies for the fallen. They were deeply meaningful for everyone,” said Boucher.

“Our experiences are defined by the people we are with, you could be in one of the worst situations, but if you are with good people, it is always better.”

Once a soldier, always a soldier and Boucher has a certain appreciation for his ancestors’ abilities from 1885.

“At the homestead in St. Louis, on the property beside us there is a trench there that my great grandfather hid in from the North West Mounted Police. It is still there with a Métis flag pole beside it,” said Boucher.

“Just a few years ago my sister and I went to go look at it. Our cousin told us about it. They had reinforced it with some logs. I hopped in there. It is a reverse slope position so you can see nicely up the hill. You can see up the river both directions so if they were coming up that way, he had escape routes. It was an effective position. I admired his tactical acumen. It was a well sited trench.”

Boucher holds himself as a Métis soldier and asserts the military is a place for everybody.

“Whenever you put on a uniform, everyone looks the same. But it also amplifies and celebrates our differences. As a Métis soldier, recently we have been permitted to wear our sash. First Nation people can wear braids. I wore my Métis sash when I received my Order of Military Merit,” said Boucher.

“The Commander of the Chief of Defence Staff came and talked to me about it. The Governor General mentioned it when I received my medal. She said she loved my uniform. Our Regiment has a lot of First Nation and Métis and many other races of people. We reflect Canada. You take all those diverse backgrounds, and you learn together.”

Boucher has about five years left in both careers before he retires. Once that day comes, he will be busy helping run Saskatoon Skydive where he is a partner in the business, and he also intends to keep being a trainer.

His friend and fellow retired soldier, Joel Pedersen, operates 2J2 Fitness and they do physical activity programs and train security guards, something Boucher has a long track record in and he loves it. So this world traveller won’t be bored. And he will always be Metis.

“I like wearing my sash, especially when I am in uniform at special events or cultural appropriate events,” said Boucher.

“I enjoy doing it because it is sort of a message that the Métis are still here. Still part of the country and I think that is important, especially for young people to see.”