A historic day of the Metis Nation-Saskatchewan (MN-S) and residential school survivors, as resolution for the Ile-a-la-Crosse Boarding School survivors is now in sight. 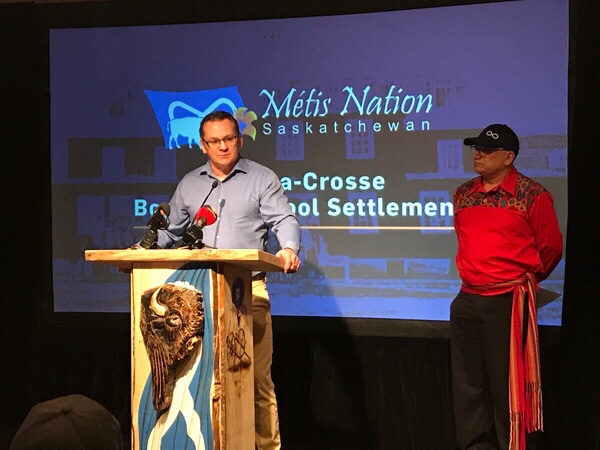 A memorandum of understanding (MOU) will be signed between the Government of Canada and a steering committee representing the Ile-a-la-Crosse survivors, said MN-S President Glen McCallum on Wednesday.

“For decades, survivors and their families have advocated passionately and fiercely for recognition of the students who attend that school,” said McCallum.

“We have had promise after promise by federal governments to address [these] issues. We can finally say the issues has been discussed in an open and honest manner and that our people will be properly recognized.”

The MOU will lay out the plan and process for fair resolution for the Ile-a-la-Crosse survivors who were left out of a resolution that was negotiated in the 1990s.

“The legacy left behind by the Ile-a-la-Crosse residential school has proven to have broken people, broken homes, broken communities,” said McCallum. “The time has come to address that legacy, own it, and find a meaningful resolution. That's where we're at right now.”

McCallum said that the MOU will be finalized within 30 days of Wednesday's announcement. The steering committee will negotiate with federal officials on the class action law suit against federal and provincial governments currently before the courts.

The Ile-a-la-Crosse Boarding School operated from the 1880s to the mid 1970s before it closed and became a treatment centre. Despite survivors having lost their culture, language, and traditions, as well as victim to abuse, they were never included in the 1990s compensations.

Steering committee member and Ile-a-la-Crosse survivor Leonard Montgrand spoke on the importance of finally being recognized.

“This is a historic day. For myself, it's been a long, long journey. For a lot of people out there that are listening, they will understand that we have fairly received recognition as Indigenous people. As Metis people, we suffer the same as our brothers of First Nations residential schools,” said Montgrand.

“I can't understand that. I've asked myself that question – why – and I have no answer,” he said.

“I have personally endured the abuse of a residential school and I have spoken at length about the impacts,” he said. “It is impossible for people who have never attended to understand the impact. For those who endured and survived, the impact continues to this day.”