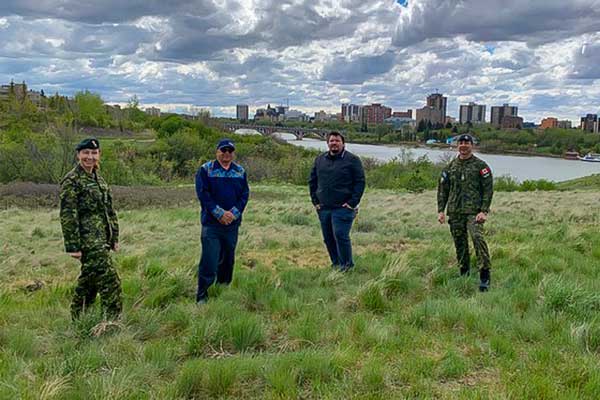 This year marks the 25th anniversary of the Defence Aboriginal Advisory Group (DAAG) for the Canadian Armed Forces and Department of National Defence.

On May 21, the Army’s highest-ranking officer in Saskatchewan, Colonel Gwen Bourque, met with Metis and First Nations leaders to recognize the importance of Indigenous Awareness Week, the connection Indigenous soldiers from Saskatchewan have to our country and to confirm the Canadian Army’s commitment to a continued partnership with Indigenous communities.

On the riverbank of the South Saskatchewan River in Saskatoon, on Treaty 6 Territory and the homeland of the Metis, Colonel Bourque met with Glen McCallum, President of Metis Nation - Saskatchewan (MN-S) and Kelly Wolfe, Chief of Muskeg Lake Cree Nation, who served in Afghanistan with the Princess Patricia’s Canadian Light Infantry.

Bourque, who is Commander of 38 Canadian Brigade Group, recognized the “amazing contributions,” of Indigenous soldiers who have served in the brigade.

“I am extremely proud to be in command of a formation that does such a great job of working with Indigenous soldiers and advisors in making sure recruiting initiatives, exercises, and summer programs such as Bold Eagle, Exercise Arctic Bison, and Camp Eagle’s Nest are as successful as they can be,” Bourque said.

“As my tenure as commander goes on, I look forward to continuing the development of strong and effective relationships with the Indigenous communities within 38 Brigade’s space as well as taking any steps towards further reconciliation.”

President Glenn McCallum of MN-S said he is proud to pay homage to the Indigenous people who have served and continue to serve this country.

“It’s not known exactly how many Métis have served in the Canadian military, but service to your community, your nation, and to a larger cause has always been a part of Métis culture,” he said.

“We honour our service members and veterans for all they have provided. Today, members of the Canadian Armed Forces reserves are on the front lines in Saskatchewan’s North, partnering with MN-S, First Nations, and community leaders to safeguard our residents against the spread of COVID-19.

“We are grateful for the opportunities provided through Bold Eagle, Raven, and other Canadian Armed Forces leadership-training programs that open up new opportunities for our youth and show respect for our identity, culture, and values,” he said.

Chief Wolfe said Indigenous Awareness week, “is a time to acknowledge and honour those who have served, continue to serve, and those who have made the ultimate sacrifice.”

“We also remember the barriers our people faced when they came home from war: the broken families due to residential schools and not being allowed to vote in provincial or federal elections until the 1960s, even though they fought for Canada.

“I heard the stories from our First Nations Veterans coming home and not being allowed to go into the establishments with their comrades, having to sit outside. Our First Nations Veterans were not entitled to land like other non-Indigenous veterans that came home from war, or the opportunity to go to University or post-secondary. Instead, some were given reserve land that already belonged to them.

“So when I think of our veterans that served before us, I have admiration for their strength and resilience dealing with the barriers of that era,” Wolfe said.

The DAAG is made up of current serving members and civilians from the defence team across Canada. It provides and promotes education and support on Indigenous matters for all in the defense team. It empowers and encourages First Nation, Metis, and Inuit peoples to be proud of their culture and to have success in their careers.

Over the years more willingness to understand Indigenous cultures has started in the military and continues through active programs and information sharing.

In Saskatchewan, the Army is represented through the 38 Canadian Brigade Group, commanded by Colonel Bourque from Saskatoon. Her brigade covers all of Saskatchewan, Manitoba, and a corner of Ontario. The Royal Canadian Air Force is represented by 15 Wing Moose Jaw, Base commander Colonel Ron Walker and Chief Warrant Officer Marlene Shillingford, who has also been actively involved in the Indigenous community over the past few years. The Royal Canadian Navy is represented by HMCS Unicorn in Saskatoon and HMCS Queen in Regina.