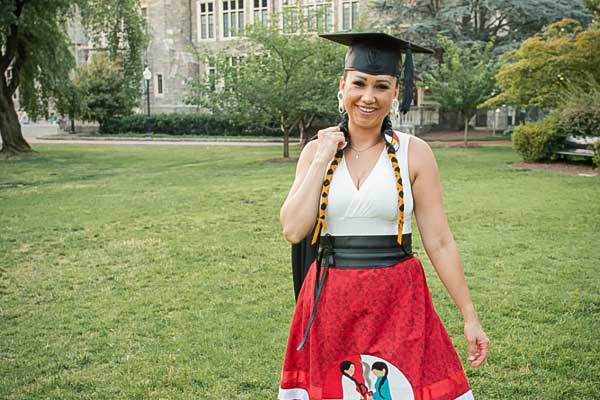 Nordica Owens, Master of Science in Nursing graduate in front of Georgetown University in Washington D.C where she graduated Her ribbon skirt has designs of western and traditional medicine to represent the two working together and the medicine wheel to represent the mental, physical, spiritual and emotional aspects to health. Photo by Kimberly Mcleod

Nordica Owens always knew she wanted to be a nurse but first she became a mother and a teacher who traveled before pursuing her dream.

Owens, who was Nordica Gibb before she was married, is from Cumberland House Cree Nation. On May 16 she received her Master's of Science in Nursing from Georgetown University in Washington, D.C. She also worked towards being an Advanced Practice Registered Nurse and a Certified Family Nurse Practitioner during her practicums. After graduating grade 12 in 1993 at Cumberland House, she had her first son, Theron, in 1994. She knew education was the key to providing for him.

Owens second son, Thane, was born in 1997 and she earned a teaching degree from the University of Saskatchewan ITEP program in 1999. She taught for five years, her first year in Stanley Mission and four years in Cumberland House. She then applied for a program to teach in under-served communities in the United States to experience something new and travel.

She and her family moved to North Carolina, where the program sent her to teach. That is where she met her husband Colonel David Owens, US Army. They moved to several places in the United States where she would teach. After a while she decided to pursue her dream of becoming a nurse.

"As a kid I remember being hospitalized in Nipawin," said Owens. "I remember being in that hospital and just really looking up to those nurses taking care of all those people.

"I truly wanted to become a nurse practitioner to have the opportunity to serve communities like the one I grew up in and give back to those who are too often neglected."

She took the pre-requisites for her nursing degree online while she taught. She then studied at the University of Saint Mary in Leavenworth Kansas for two years to complete her Bachelor of Science in Nursing.

She began her Master's of Science in Nursing at Georgetown University in Washington D.C. while living in Hawaii and took online classes the first year.

"I was working in the military hospital [in Hawaii] in the cardiology department," said Owens. "My whole first year of my master's program, I took classes pretty much in the middle of the night and then I would go to work."

They moved to Washington D.C to finish her master's degree and Owens nearly gave up during her last month of practicum.

"I was exhausted, I felt like I was completely done," said Owens. "I used the analogy of when people fall in a race when they see the finish line ... That was how I felt."

Owens says when she completed her master's degree this May, it was like a weight was lifted. She had a ribbon skirt made to wear at her graduation, which was cancelled due to Covid-19. She had beadings of traditional and western medicine sewn to the skirt.

Owens says nursing is caring for the whole person, physically, mentally, emotionally and spiritually. She said the medicine wheel aligns with the nursing model of care.

Owens is currently living in Florida and working as a nurse practitioner. She plans to get as much experience as she can and when her husband retires from the army, she would like to return home and serve as a practitioner to the people in her community.