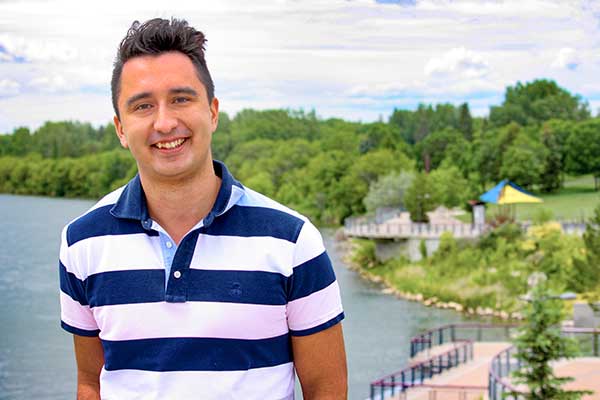 Mitchell Anderson, United Church Minister and Affinity Credit Union Board Member, in his home neighbourhood of Riversdale, in Saskatoon.

On a seemingly ordinary school day, eleventh-grade student Mitchell Anderson stood on the front steps of his high school in Meadow Lake and handed out pink triangles he had cut out of construction paper the night before.

Anderson had previously tried to start a Gay-Straight Alliance at his school, but school administration had shook a disapproving finger. That morning was a Pride day, recalls Anderson, and whether he had his school’s approval or not, he was going to celebrate by showing the entire student population how many allies it had.

By the end of the day, Anderson had 200 of his classmates wearing triangles, but more importantly, had learned something invaluable that has stayed with him since.

“I realized one person, with just a couple bucks worth of paper, can make a big difference. And that I had the courage to actually do something, to make a big impact pretty quickly,” said Anderson.

“So, I’ve tried to take that spirit I had as a kid and take it forward as an adult, and say, ‘wherever I go, if I ever have influence, to always use that influence for inclusion.’”

Anderson, now 30, is a Minister in the United Church in Saskatchewan, serves on the United Church’s national board, and to ensure his portfolio is exceedingly diverse, also serves as an Affinity Credit Union board member.

Anderson was ordained last summer and has since been serving as Minister of United Knox Church in Lanigan, and United Nokomis in Nokomis, both of which, he says, are predominately white and senior congregations.

“When you’re a 30-year-old Indigenous dude, that’s just a little bit of a culture shock, so there’s some bridging that needs to happen to make it work.”

Anderson has been embracing some less conventional approaches to church while still honouring tradition. Due to the pandemic, Anderson shifted everything online in March, which he said has actually led to increased engagement. In the spirit of inclusion, he is also trying to connect with younger generations by hosting outdoor services, picnics, and something he calls ‘messy church’, which incorporates crafts and games with Bible study. His efforts have netted positive results, with about ten per cent of the town coming out to their messy church in Nokomis.

“The old way of doing church isn’t really working anymore. We need to figure out new ways. We don’t always know what that is, so we need to try something new,” said Anderson.

“Even if you’re not big-C Christian, people are looking for hope and encouragement and wanting to understand something bigger than themselves now.”

The responsibilities that come with his role on the Affinity Credit Union board, a position he’s held for nine years, are much different from those of his main job, but finds the intellectual challenge of tackling business issues rewarding.

He balances the two dissimilar but consuming disciplines by being ruthless about investing his time and energy into only things he’s passionate about.

“There's so much in the world that I think can and should be better. It’s hard for me to step back and say, ‘okay that’s fine.’ I need to go out and be making change in the ways that connects with my soul,” he said.

“When different kinds of people, with different backgrounds and different beliefs work together to try to make a positive impact, I think that’s when the world changes and that’s where I try to focus my time.”