Don Burnstick being naughty and nice in Saskatchewan 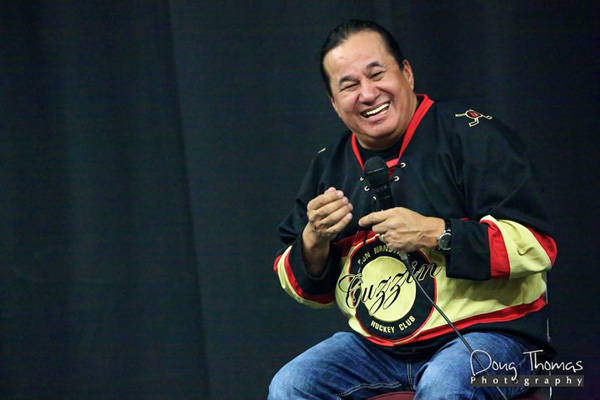 Coming back to Saskatchewan is always fun for Don Burnstick and in September he has a couple of really good reasons to visit. First of all, Don will be the emcee for Tanning Hides, a fundraiser put together by a committee in Saskatoon to raise money for evacuees from the northern forest fires this year.

“This will be a good all ages show and for a very important cause,” said Burnstick in an interview with Eagle Feather News. “I like to help people and we are all in this together so let’s help each other out.” Tanning Hides happens Sept 17 at the Dakota Dunes Casino. This event will include a roast of several chiefs including Lac La Ronge Indian Band Chief Tammy Cook-Searson and Saskatoon Tribal Council Chief Felix Thomas. Other entertainers are expected as well as a silent auction.

Don is also bringing his Hall Pass tour across Saskatchewan with shows in Regina and Saskatoon in late September and Lloydminster and Prince Albert in early October. This show is a bit more adult themed according to Don.

“Hall pass isn’t about school, it is from that movie where married people get to go out one time and you know, do their thing.  My wife and I were talking about that movie and we were driving through Saskatchewan which has some really good names for towns,” said Burnstick. “You are the only place that has Love, Climax and even a town called Indian Head. So we put together this story with all the towns and First Nation communities and we put together this phenomenal and fun story that has a lot of sexual innuendo.”

Don is excited about the new material and even had one Chief come up after a show and asked that his reserve be included.

“Now we have to include Little Red,” laughed Don. “There is nowhere else I could do this type of story in Canada or in the States. Only in Saskatchewan. The people are really hearty folk with such a good sense of humour and can laugh at themselves.”

For info on the tour, check out Don’s Facebook page.

Related story: Tanning Hides: a night of laughs and entertainment

Click here for more laughs in our Humour section.