Dreams come true when you find your passion 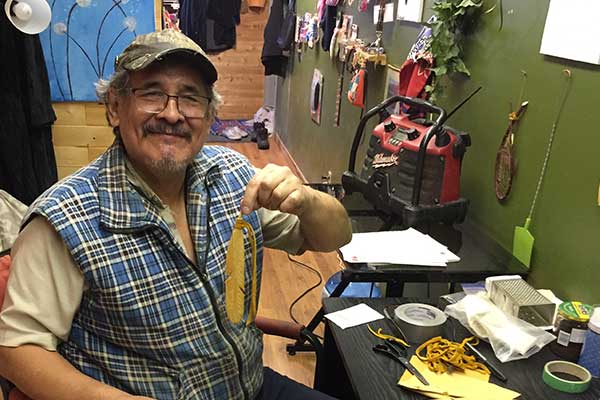 Russel 'Rusty' Iron sitting at his desk finishing one of his feathers. Photo By Judith Iron

Being creative and resourceful with your surroundings takes talent. Being able to generate an income while doing it is a gift. On the Canoe Lake Cree First Nation employment is limited so most residents rely on social assistance. Russel 'Rusty' Iron was just such a band member who was unemployed and needed a income to survive. Iron felt he needed to be more productive and financially self-sufficient so he put his creative ideas into action using the resources available to him. Iron lives on a reserve surrounded by lakes, land, and trees. The landscape and all its offerings became his palate.

'I started to carve talking sticks out of trees. It was hard to do. I managed to sell a few at $500.00 each, but it took me months to make one, so it really was not enough for me to live on.'

Iron eventually sought employment outside of the reserve. He traveled to California and Las Vegas at the request of some friends and stayed after securing steady employment as a maintenance man. During his downtime, he volunteered at a senior's leisure center and took carving classes. Iron learned the art of carving feathers using a knife. After 5 years of absence from his home community, Iron returned to Canoe Lake to start a small home-based business selling carved feathers.

'I sold my first handmade batch very quickly at $35.00 each. Not long after I started I was getting bulk orders. I was doing it by hand. I had to figure out a quicker way,' says Iron, 'I bought a woodworking tool called a Dremel, but it was hard to get used to. I had to find the right bit, but when I did I was able to make my pieces faster than ever.'

Many First Nations organizations from across the provinces gift their students, attendees, and/or dignitaries with Iron's beautiful handiwork because of the quality and the care he takes in making them, 'When an order is placed I am able to personalize them with names or events. My feathers are carved and glazed. I then add a leather strap around the base and finish it with a piece of sinew for hanging in your home or car. It's a nice keepsake for anyone who gets one.'

Iron has found his passion and is living the ultimate dream of doing something he loves while getting paid for it.