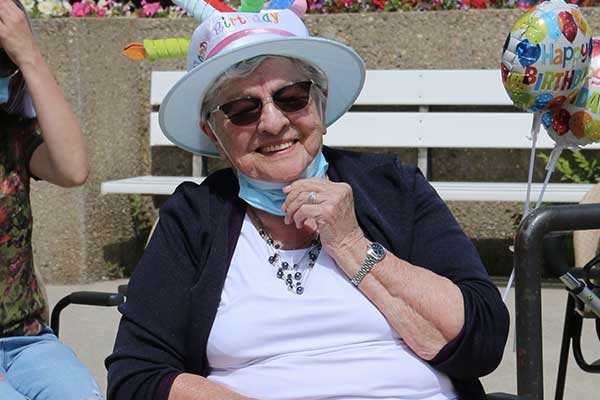 Elder Mary Heimbecker was the recipient of a surprise 90th birthday party, which included a drive-by dignitary parade and speeches by such notables as the Lieutenant Governor at her senior’s residence on Louise Street in Saskatoon.

“I am used to being the one organizing these types of things,” said Heimbecker afterwards, admitting she had been surprised, and joking mischievously to her daughter Donna, “If I’d known what you were up to I’d have gone out the other entrance instead.”

Lieutenant Governor Russell Mirasty was one of many dignitaries who, after the car parade, gave speeches, including Police Chief Troy Cooper and Mayor Charlie Clark, along with representation from the Métis Nation of Saskatchewan and CUMFI Local President Shirley Isbister.

Music was provided by Phil Boyer and his son Dallas Fiddler, and dancing entertainment was provided by Wilfred Burton and a few others in the crowd, while hoop dancer Lawrence Roy Jr. also performed for the crowd gathered outside and watching from inside the building, masked and socially distancing due to COVID-19 restrictions.

“We are here to recognize Mary Heimbecker for her 90th birthday and for all the work she has done over the years,” said Mirasty, noting she’d been awarded the Saskatchewan Volunteer Medal in 2005 for her contributions to the province, particularly her work with women and families.

Pat Trask was also turning 89 and has also been an active member of the community, known for fundraising by baking pies as but one example of her work in the community, which has earned her the nickname “the Pie Lady”, so both ladies were included in the surprise party. “We are celebrating all our seniors and Elders who give so much to this province throughout their lives,” Mirasty said.

Many of the speeches noted how difficult it has been to gather in these times and how nice it was to see everyone gather to celebrate such a momentous occasion, even if they were all masked. Senator Nora Cummings, who lives in the same residence, was one of the main planners of the event and admitted it was hard to keep it a secret as she organized all the various dignitaries, but downplayed it to Mary and Pat saying they would just gather outside on Sunday.

“I want to thank you all for attending to celebrate these ladies… It just amazes me the work they still do in the community,” said Cummings who acted as Master of Ceremonies, carefully wiping the microphone between uses, having employed her many years of activism and connection in the community to ensure all the dignitaries could attend, including the Lieutenant Governor and his wife.

As for Heimbecker, who was born on Muskeg Lake Reserve in July of 1930, she said she was completely surprised by the whole thing — a rare thing perhaps, because not much surprises you after ninety years of living.