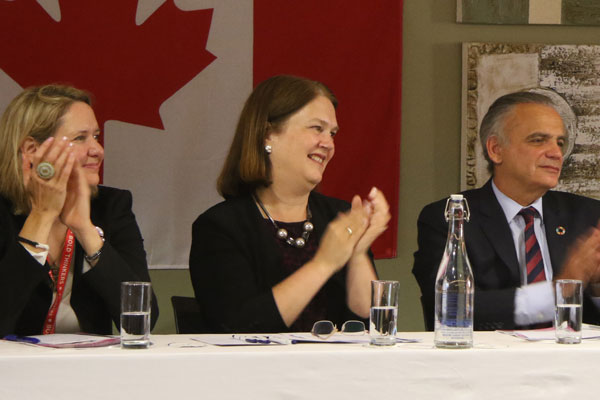 “What we want is this department to become an anomaly, the department should disappear over time,” said Deputy Minister Tremblay.

The creation of this new department was announced in August 2017, and officially created by Orders in Council on November 30, 2017. Five priority areas were announced on what Minister Philpott wants to address and focus on: improved health outcomes, education, children and families, infrastructure and new fiscal relationship.

“There are tremendous gaps…in a variety of areas that have to do with funding,” said Minister Philpott. “The challenges are certainly there but we have made progress.”

She added that under Carolyn Bennett, Minster of Crown-Indigenous Relations and Northern Affairs, they’ve received investments of $2.6 billion dollars over a five-year period to support the primary and secondary education on-reserve. According to Philpott, there are now 58 new schools are being built and dozens more renovations are underway.

“Services to Indigenous people should be delivered by Indigenous organizations,” said Deputy Minister Tremblay. “Looking at what are their needs, assessing their needs and working with them.”

Under the children and family key point, Minister Philpott said the Indigenous child welfare system in Canada as a humanitarian crisis. She added that she will be speaking more on this topic later this week during an emergency meeting with provincial governments and Indigenous leaders.

“There’s so much work to be done in this area but I do want to share encouraging news that progress is underway,” she said. “At the meeting later this week, it’s going to be a first time that the Metis Nation and the Inuit will be gathering with us to discuss the issue of child family services.”

Infrastructure was another key priority in working through the challenges which includes lifting the long-term drinking water advisories for public systems on-reserve by March 2021.

“Today, there are 91 long-term drinking water advisories that exist on public systems on-reserve,” said Minister Philpott. “Our department of Indigenous Services Canada will provide support to communities to ensure those advisories are lifted.”

“A new fiscal relationship is absolutely essential if self-determination is going to be a reality,” she said. “We’re not talking about no reporting, we’re talking about better reporting as a matter of what is reported and to whom it is reported.”

The Indigenous Services Canada briefing was held in Ottawa as well as the emergency meeting on Indigenous child welfare scheduled for January 25, will be held in Canada’s capital.