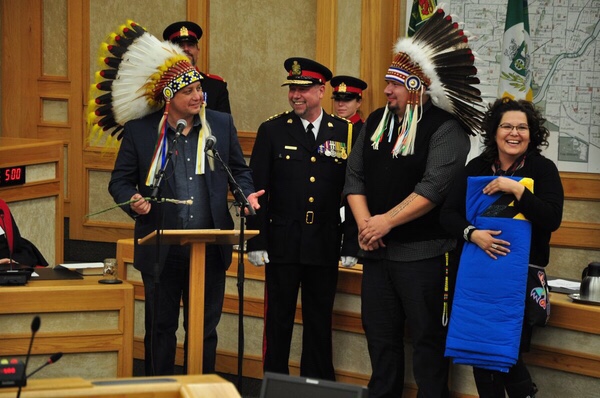 STC Tribal Chief Mark Arcand (left) says he breathed a sigh of relief when he found out about newly appointed SPS Police Chief Troy Cooper’s involvement in the Indigenous community,

From being confronted with a coroner’s inquest involving the police one week to responding to Saskatchewan’s first string of fatal suspected fentanyl overdoses the next, Troy Cooper says his first month as Saskatoon police chief was a challenging one.

Three have since been charged with fentanyl trafficking in connection with the three deaths, and the inquest for Jordan Lafond who died after a police chase has been postponed until June. All of this was happening while Cooper was trying to find his bearings in a new office, interviewing Saskatoon police staff to familiarize himself with their roles and priorities, and meeting with Indigenous leaders in the city.

“There always seems to be some moving part that I have to be aware of and keep track of because the city is large and it’s a focal point for many of these policing issues for sure in the province,” Cooper said.

Cooper is no stranger to serious crime. He comes to Saskatoon with 30 years as a police officer in Prince Albert under his belt, five of those as police chief.

“We were concerned across Saskatchewan for the last year or so that we were going to start seeing fentanyl in a bigger way,” he said, pointing to Alberta having had 462 overdose deaths within the first 11 months last year.

“Of course, when it happened here it was very scary and sort of reaffirmed our resource need around drug trafficking.”

Cooper, a Metis man originally from Big River north of Prince Albert, also recently found himself submitting a report on diversity in the police service. Cooper had championed the 36 per cent Indigenous representation at Prince Albert police, and vows to continue that in Saskatoon which has a much lower 9.8 per cent Indigenous representation on its staff.

“There’s trust issues I think right now across Canada around the different parts of the justice system, and that obviously includes police. So for us to maintain the trust of the community we have to reflect the community,” he said.

He said diversity recruitment and strategies to bring in committees with Indigenous people are among the ways Saskatoon police will work towards its goal of having 14 per cent Indigenous representation.

Cooper’s appointment has been championed by many Indigenous leaders, from the Federation of Sovereign Indigenous Nations and from local Metis Elders. He was known as an active community member in Prince Albert, attending walks for Missing and Murdered Indigenous Women, powwows, and other significant event to the Indigenous community. Saskatoon Tribal Council Chief Mark Arcand said he breathed a sigh of relief when he found this out.

“To me that spoke volumes, that gave me more confidence, more comfort to say we now have a Metis man that understands Metis and First Nations issues and really wants to make a difference,” he said.

“I was really nervous, I thought they were going to bring in a rookie and we would have had to start this whole reconciliation piece over again.”

Cooper said his main focus right now is getting to know Indigenous groups in and around Saskatoon.