First Nations and Métis in Saskatchewan will continue to receive funding for programming and services to address services, which include health, education and social services, but the amount allocated is less than what was in last year’s budget.

“The Government of Saskatchewan remains committed to the province’s First Nations and Métis people,” Government Relations Minister and Minister Responsible for First Nations, Métis and Northern Affairs Warren Kaeding said in a media release. “With this budget, we will stay on track with our economic recovery, while continuing to provide services and programs and economic opportunities for all Saskatchewan residents.”

The recently released Government of Saskatchewan‘s 2018-19 Budget titled “On Track” will allocate approximately $200 million for targeted programming for First Nations and Métis organizations and/or individuals.

In comparison, the 2017-18 Saskatchewan budget allocated $210 million for First Nations and Métis funding – which is a $10 million decrease in this year’s budget.

NDP Athabasca MLA Buckley Belanger said there’s not enough being done in the perspective of reconciliation within the Indigenous communities in Saskatchewan.

“There’s no effort whatsoever on that front from the provincial government,” said Belanger in a phone interview with Eagle Feather News. “Once again, we’re seeing that the north is being ignored and left out…it’s really discouraging.” 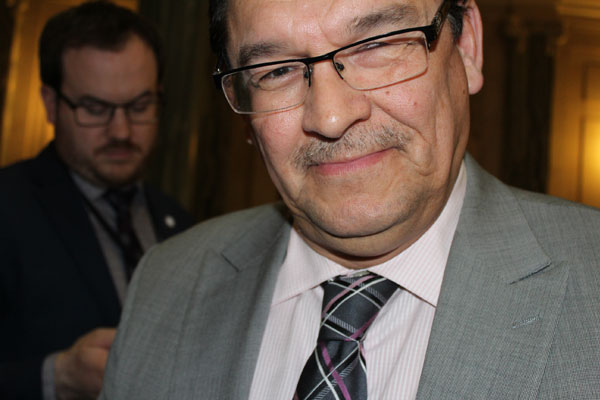 “This [provincial] government has not yet responded in any way, shape or form to some of those calls,” he said. “It just shows you there’s a lot of disregard…that hurt the north overall.

The Federation of Sovereign Indigenous Nations (FSIN) Executive was more hopeful for the 2018 Provincial Budget even though funding has decreased to First Nations organizations and programming, which is a result of Gaming transfer payments, lower casino revenue forecasts and savings from university programming cuts in the North.

“It’s disappointing to see the Province continue to move in the wrong direction with First Nations,” said FSIN Chief Bobby Cameron in media release. “While it is encouraging to see some investments in health, education and justice, we need to see the Province step up with greater investments in these and other areas that are affecting the quality of life for our people.”

FSIN Chief Cameron and Vice-Chief’s added other areas that needed funding focuses are on policing and correction, children and social services, education, employment, investing in prevention services for addictions and recovery and mental health support for northern communities.