The Federation of Sovereign Indigenous Nations (FSIN) is calling on the Saskatchewan government to follow British Columbia’s lead in ending birth alerts. 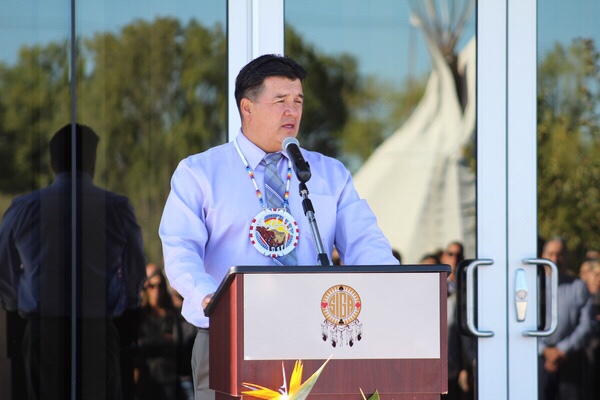 FSIN Chief Bobby Cameron is asking the provincial government to follow the footsteps of B.C., as recommended in the MMIWG report: “call upon provincial and territorial governments and child welfare services for an immediate end to the practice of targeting and apprehending infants (hospital alerts or birth alerts) from Indigenous mothers right after they give birth.” Stock photo

On September 18, 2019, the FSIN announced a call-out to end the child welfare practice of birth alerts following the steps of BC’s Minister of Children and Family Development, Katrine Conroy, who made a similar announcement this week. The BC Government has put an end to the controversial practice that has been used for decades, acknowledging that hospital birth alerts were primarily used against vulnerable or marginalized women, especially First Nations women.

“We applaud the BC Government for ending a common practice that discriminates against First Nations mothers and parents based on the biased and prejudiced opinions of health staff and hospital officials,” said FSIN Chief Bobby Cameron in a media release. “We are strongly urging Saskatchewan Social Services and Saskatchewan hospitals to reconsider their continued practice of flagging apprehending infants at birth, despite recommendation from the Missing and Murdered Indigenous Women and Girls (MMIWG) final report for an immediate end to the practice. It shows a direct lack of respect for our families and the Inherent and Treaty Rights of our women and children. Our children deserve to be in their own homes and communities where they can learn their language, culture and traditions.”

According to the MMIWG report recommendations under section 12.8, it stated that they “call upon provincial and territorial governments and child welfare services for an immediate end to the practice of targeting and apprehending infants (hospital alerts or birth alerts) from Indigenous mothers right after they give birth.” The FSIN’s call out to the government is following the report’s recommendations.

“We are encouraged by British Columbia’s move to end birth alerts and encourage Saskatchewan to also put an end to a practice that weakens and destroys family bonds and goes against our traditional First Nations family values and kinship systems,” stated FSIN Vice Chief Morley Watson. “This practice discriminates and targets First Nations women and families. We applaud the BC Government for moving towards a system that will help families and focus on preventative measures that offer prenatal supports and services to mothers who need or want it. We need this same system and shift in focus in Saskatchewan. We need to work together to give these parents the skills and support they need, instead of tearing apart a bond that begins to develop from birth. Taking babies from their mothers is a genocidal practice that needs to end in Saskatchewan.”

The FSIN has been working with several organizations on implementing a framework with traditional roles, including the use of midwifes and doulas, that connects First Nations expectant mothers to necessary supports they need, as stated in the prepared release.