Get out and celebrate National Indigenous Peoples Day

Most Canadians might say Canada Day is the day they think of the most when it comes to the summer. However, National Indigenous Peoples Day (NIPD), which takes place on June 21, is a day marked on people’s calendar to celebrate the First Nations, Métis, and Inuit people, their culture and achievements. 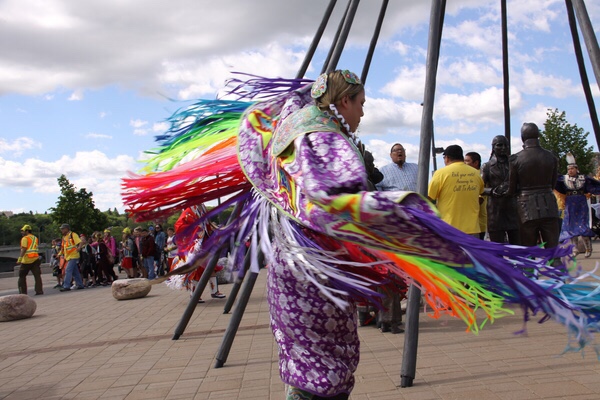 National Indigenous Month goes back 12 years. In 2007, Aboriginal History Month (AHM) was initiated by a non-profit grassroots organization called Regina Aboriginal Professionals Association (RAPA). After being put forward by Member of Parliament Jean Crowder-Nanaimo-Cowichan in the House of Commons in 2009 it received a unanimous vote.

“I think that recognizing the past and showing that the spirit of Indigenous culture is still alive and thriving in a multicultural community is very important,” said Brad Bellegarde Regina’s Cultural Diversity & Indigenous Relations Advisor. “When we talk about First [Nations] peoples, it’s very important to recognize that it’s not something of the past, it’s something of the present.”

For NIPD this year, Regina has many events going on in Victoria Park starting at 10 AM where a grand entry and opening prayers will be held. Various dance groups will be performing throughout the day. And Indigenous female rappers Ekwol & T-Rhyme have two 15 sets throughout the day. There will be a free BBQ for lunch and the day will then end with a round dance.

NIPD is also being celebrated cross the province in much the same way.

In North Battleford, there will be similar activities. Sandra Favel Rewerts, Director of Health Promotion and Planning at Battle River Treaty 6 Health Centre, said the day will kick off with a pancake breakfast where various musicians and Little Pine Dancers/Drum Group will be performing. In the morning, there will be a Relationship Framework signing between the Mayors and Chiefs and a 40th anniversary presentation for the health centre.

“National Indigenous Peoples Day pancake breakfast is important to us as it provides an opportunity for the community to come together and celebrate First Nations culture and talent as well as visit old friends. The entire community is invited fostering positive relationships as we move closer toward reconciliation,” said Rewerts.

Prince Albert will hold their NIPD festivities in Kinsmen Park. There will be a teepee raising and pipe ceremony in the morning at 9AM. Opening ceremonies will start at 2PM with entertainment such as square dancing, pow wow demonstrations and fiddle music. Artesian booths such as beading, moccasin making, sash making, and bannock making will be held. The children’s area will host various games, face painting, beading, and crafts. These events will go on until closing ceremonies starting at 8:00

Saskatoon will also be hosting their Indigenous Peoples Day celebrations in Victoria Park hosted by the Saskatoon Indian and Metis Friendship Centre. The day will kick off with the annual and popular Rock Your Roots Reconciliation Walk to honour the residential school survivors, during which thousands of people share a beautiful walk by the river. Dignitary speeches will follow at 11:30 with a lunch and entertainment. There are activities all day at Wanuskewin Heritage Park.