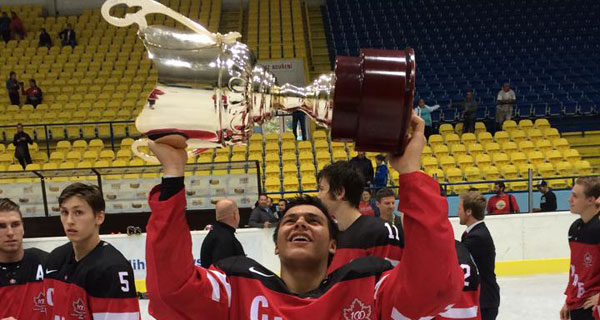 Arriving in Regina, Team Canada’s Ethan Bear received a hero’s welcome from friends and family after winning gold in group B for the Ivan Hlinka Memorial Cup, under-18 men’s hockey tournament, outscoring Czech Republic 6-2 in the final game.

The 17-year-old from the Ochapowace First Nation says the tournament was a once a in a lifetime opportunity, after being one of twenty two players selected to represent Canada.

“It was a goal of mine and I always wanted to work hard,” said Bear. “I wasn’t sure if I was going make (Team Canada), I was kind of having doubts but then I kept positive and talked to my uncle Evan and he said, just be positive and have fun and I did, I kept it simple and played my game. “

For generations, Ochapowace has raised dozens of young athletes in both softball and hockey and the reserve celebrated another athlete. Dozens of community members honoured Bear at the newly constructed Chief Denton George Memorial Multi-Plex. Family members stood proudly with Bear as elders from the community wrapped Bear in a Pendleton blanket and an honour song was sung by the reserve’s local drum group.

“Through his dreams he has accomplished something very special,” said Margaret Bear, Chief of Ochapowace. “We are so proud and honoured to come together as a community to recognize his accomplishments and honour him today.”

Bear comes from a long line of family members who have played hockey. Ethan’s mother, Geraldine Bear said Ethan’s late grandfather; Fred Bear would walk with his brothers to the neighboring town of Whitewood just to play the sport in the 1960s. The community hockey rink would later be named after Fred, the same rink where Ethan learned how to skate at the age of three. Geraldine is thankful the community and the late Chief, Denton George supported her family over the years and she carries that sentiment forward.

Bear hopes to continue his dream of playing professional hockey as he starts his second season with the Western Hockey League’s Seattle Thunderbirds in the United States. His message to the youth is, “Find something you’re really good at and stick with it. Education will always be number one. You need to have something to fall back on. Work hard, stay on track and limit the distractions in your life.” 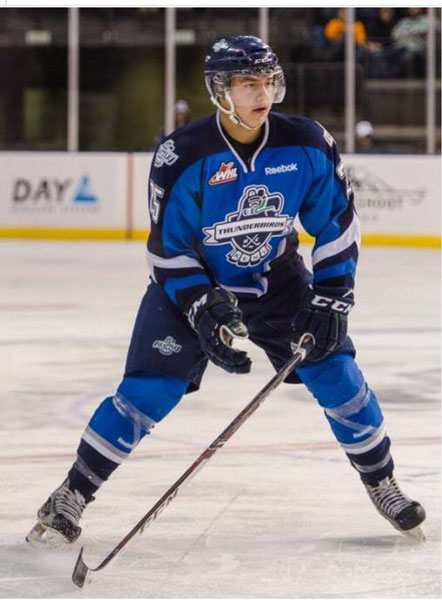