Harley Stonechild Kaye has lost far too many friends to the brutal ways that death comes to those living on the streets – and were it not for a fellow homeless man he calls his “brother”, he might have been one of them.

“When he’d see me lying in the alley… (he said) ‘I’ll keep you warm,’” Stonechild Kaye said of Wilfred McCallum, the friend who taught him how to survive on the streets. 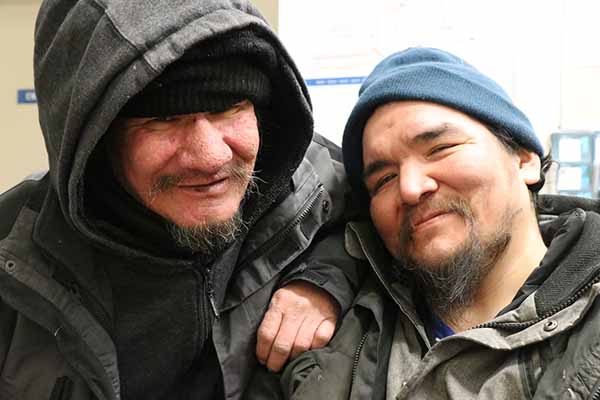 Wilfred McCallum (grey hoodie) and Harley Stonechild Kaye were involved in the homelessness memorial holding up candles to commemorate those who died living on the streets.

The two men – one standing, the other in a wheelchair – were among the crowd gathered downtown at Regina’s City Plaza on a chilly February 4, 2020 night, attending the city’s fourth annual memorial service for those who have died as a result of being homeless in Saskatchewan’s capital.

The service was a large, multi-racial event, with a circle of glowing candles lifted high in the air, tears and hot chocolate, a canvas signed with statements of grief and solidarity, a drum song and an elder’s prayer. There were also calls to action, promises of change, and stories from those who spoke from their personal experience of homelessness.

Cody Francis, an Indigenous man who works with Regina’s Street Culture Project, said it warmed his heart to see that several hundred people had come to acknowledge and mourn those who have died. “Being homeless, you get in the habit of telling yourself, ‘Nobody cares,’” Francis said.

Mayor Michael Fougere called on every level of government – provincial, federal, and municipal – to end the tragedy of homelessness, and the pain and even hopelessness that those living on the streets deal with every day.

“We should be here to help them,” Fougere said.

The City and the Regina Police Service are taking steps, as are organizations such as the Street Culture Project and Phoenix Residential Society, which co-sponsored the memorial service. They are helping the city’s homeless population every day.

Stonechild Kaye, McCallum, and speaker Dean Bear are just a few of those who now have safe, secure housing through Phoenix’s HOMES program.

“They’re very important to us,” Bear said of Phoenix. “Now (that) I have a home, I am more secure, emotionally, mentally, spiritually, and physically.”

Even with those successes, homelessness remains a serious problem in Regina.

“This isn’t a typical funeral… but we’re here to say that we won’t forget, and that we commit to doing better,” said Blair Roberts of the John Howard Society. It grieves him that many of those being remembered at this event did not have that same support in life.

“It makes me sad that much of homelessness can be directly tied to the trauma of colonialism, residential schools, and systemic injustice toward our Indigenous neighbours,” he said. “When 80 per cent of those living in homelessness are Indigenous, we have to acknowledge that the problem is with the system, and not with the people caught up in it.”

Roberts believes that an end to homelessness is possible. “Our city is only as good as it treats its citizens on the margins,” he said. “Today we remember, and tomorrow we get to work.”