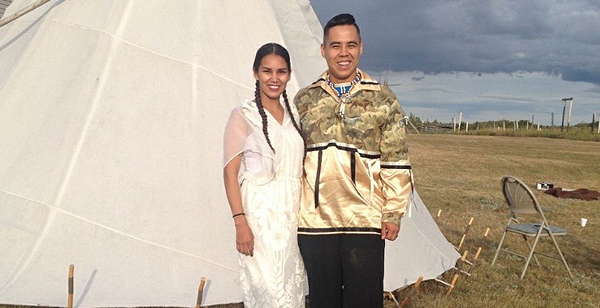 John Langan and his wife Bianca Ermine, who he says constantly supported and encouraged him as he wrote his book. Photo supplied

If you ask John Langan how he's been so resilient, he'll probably laugh. Not at the question, though. Laughter is his answer.

“I guess that's how I've dealt with it all. One of the things I found while writing (my book), my editor would tell me 'these aren't funny stories'. But I would just laugh,” Langan said in an interview.

Langan, of Keeseekoose First Nation, is a Saskatoon Police Constable and first-time author, and is no stranger to adversity. Growing up in more than a dozen towns and cities in southern Saskatchewan, he found himself surrounded by death, drugs, and violence from an early age.

His approach to adversity has allowed him to rise above despair.

“The bad times, they changed me for the good. Going through physical pain, even. I laugh about it later. That's how I heal, is laughing.”

This spring Langan will self-publish Resiliency: My Nose Above Water.

His 200-page book is part memoir and part documentation of Cree and Saulteaux culture, ceremonies, and protocols. Much the book will focus on the healing qualities connected with spirituality, he said.

“My family has always been spiritual. I found out through writing this book that I come from a long line of spiritual people – ceremonies, medicine, lots of stuff. In my book I go through my spiritual progress and how I came through it.”

The youngest of five brothers, Langan relied on family to guide him through early challenges.  His father, Henry Langan Jr committed suicide when Langan was only four. His step-father, Rodney Severight, whom Langan refers to as 'Dad', used substances to cope with the effects of his time in residential school. Severight died in 2013.

In high school, with his eldest brothers starting to get involved with gangs, Langan found himself surrounded by drugs and crime in his school and family life. After a run-in with the law, in which a group of friends tried to pin a break and enter on him, Langan decided to make some changes.

He joined the Royal Canadian Air Cadets, became president of his school's Students Against Drunk Driving chapter, and after graduating from high school, joined the Canadian Army Reserve.

“Joining the Air Cadets saved my life. I surrounded myself with positive-minded people and structure. I think that's what I needed, to have structure and a strong authority figure.”

After graduating from the University of Saskatchewan with a Bachelor of Arts in 2013, he worked at the Saskatoon Open Door Society. At a night-lodge ceremony a few years later, Langan felt a spiritual calling to become a police officer.

Now 32 and serving his fourth year as a police officer, Langan knows he's found his calling.

“When I'm out (talking to other Indigenous people), I try to get last names so I know where they're from, or what language they're from. I'll say a (Cree or Saulteaux phrase) and right away it breaks the ice,” he said.

The motivation to put his journey into a book came from his wife of three years, Bianca Ermine, who he said provides him with constant support and encouragement.

“At first, I told my wife that this book will let our children and future generations know where they came from,” he said.

“But as I started to write it, I could see it will help so many people (and) educators. This book will change the way people are policed.”

Langan said he hopes to get this book into the hands of as many police officers across the country as possible, to shine a light on the experience of young Indigenous people, and help build a foundational knowledge of the culture from which they come.

He's already off to a promising start, as Russ Mirasty, the Lieutenant Governor of Saskatchewan has read the book.

“I remember my Kokum telling me, 'We learned so much about white people. Now it's time for them to start learning about us'. That's what I'm doing.

“Our culture is so beautiful. You see how powerful our people were back in the day, and it's starting to come back now. It's going to be a beautiful thing.”