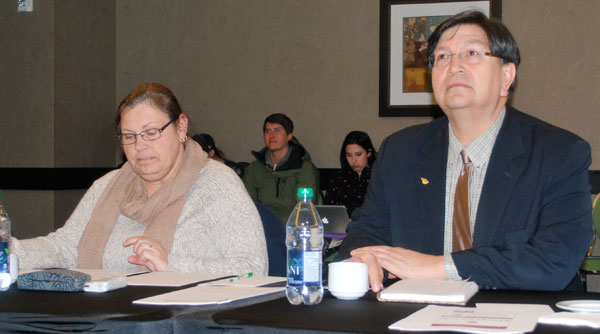 The Congress of Aboriginal Peoples is seeking feedback from its grassroots membership.

The national umbrella group representing off reserve Aboriginal people was in Saskatoon Feb. 10 as part of a cross-Canada tour.

About 30 people attended the meeting and topics discussed included the implications of the Harry Daniels case and the federal government’s responsibilities to Métis and non-status Indians, the importance of Aboriginal people voting in the next federal election and lack of affordable housing for Indigenous people living in urban centres.

Chief Betty Ann Lavallee says it is important to connect with the rank and file membership within an informal setting.

“It gives me the opportunity to get out and connect with the grassroots people themselves,” she says. “I hear – as I said through the meeting – I hear from the politicians all the time, the board of directors, I actually don’t really get a chance to get on to the ground and hear them (membership) tell me from their perspective.”

Aboriginal Affairs Coalition of Saskatchewan President Kim Beaudin has not always seen eye to eye with Lavallee or the national organization.

In fact, before Christmas he tried to get a motion passed removing the CAP chief from office.

Beaudin says he had hoped the meeting would have focused more on issues that are particularly pertinent to Saskatchewan, such as the overrepresentation of Aboriginal people in the judicial system.

With CAP no longer having regional offices in the other two Prairie provinces he also says the organization needs to listen to what Saskatchewan has to say.

“In some ways we’re the voice of both Alberta and Manitoba and if you look at the Prairie provinces that encompasses a lot of off-reserve Aboriginal people and the numbers are quite significant,” he says.

One thing both Lavallee and Beaudin do agree on is the importance of Aboriginal people voting in the next federal election.

They say Indigenous people have the potential to sway the outcome in a number of ridings if they choose to get out and cast ballots.

“Aboriginal people have the ability to make differences at the ballot box,” Lavallee says. “So, that’s my job, is to encourage young people and people who don’t normally (vote) to get out there and participate, you need to.”

Beaudin adds Indigenous people have the potential to determine which party gets elected in a few Saskatchewan constituencies including the new riding of Saskatoon West and the northern riding Desnethé-Missinippi-Churchill River.

“The excuse that I hear sometimes is, ‘well, my vote doesn’t count, it doesn’t matter.’ Well, it does count. If Aboriginal people got out and voted they could change these seats like you wouldn’t believe in this province.”

Lavallee and Vice-Chief Ron Swain are scheduled to make stops in Yellowknife, Whitehorse and Toronto before the end of the month.

The CAP meetings are due to wrap up sometime in March at which time the organization will file a report on the feedback it has received to the federal government.