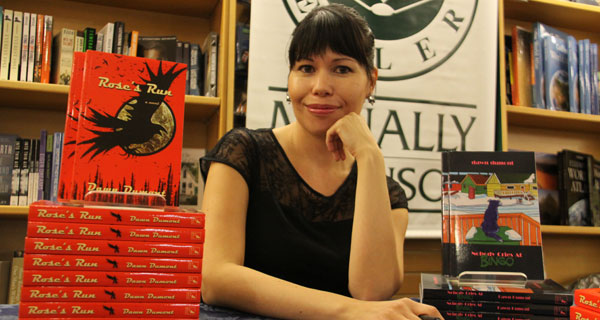 Rose’s Run, the follow up to 2012’s Nobody Cries At Bingo, is nominated for four Saskatchewan Book Awards.

Although she smokes and hasn’t run in 20 years, Rose decides to participate in her reserve’s annual marathon as a means of proving herself to local residents.

To complicate matters, Rose soon learns that aside from preparing for the race, she will also have to do battle with an old demon unintentionally called forth by her daughter Sarah.

The demon draws strength from women and is even able to get them to do her bidding.

As the marathon continues to draw closer, the spirit woman makes herself known to the reserve’s various residents creating fear, disruption and of course high jinks.

Dumont says the initial idea for the book came from something she has long loved to do – long distance running.

“I’ve been a long distance runner since I was a teenager but I never really saw how to write about it,” she says. “I never thought anyone would be interested. But then I had this dream about a woman running a marathon and that’s where I think it came from. And, also, after running a marathon, I had sort of like a hallucination during my marathon where I could actually hear people’s voices as though they were speaking to me and so I added that as part of it.”

You could say Dumont knows all about choosing the paths less chosen.

Aside from writing, she has also earned a living as a stand up comedian.

So what advice does she have for young and aspiring artists who are sure to experience heaps of rejection along with the occasional glimmer of success?

“Always write for yourself, you are your best audience. Because if you try to write for a specific audience and you don’t like it yourself, then you haven’t won anything. Because you’ll notice, if you get a lot of attention for something you’re not crazy about, it will just feel empty. So I think the most important thing is to please yourself first.”

Holding down a full-time job during the day means Dumont has to be very disciplined about her chosen craft.

She says she is a strong believer in keeping a strict writing schedule and this schedule is what separates those who talk only about writing books from those who actually publish them.

“I believe in daily writing. I don’t think you should go a day or two without writing. You should write every single day, that’s what I believe.”

Nominated in four out of 11 categories for the Saskatchewan Book Awards, one would think Rose’s Run would have a pretty good chance of picking up at least one award.

However, Dumont says she’s cautiously pessimistic as she lets her comedic side show in a self deprecating way.

“One time, I sent my plays into a playwrighting contest and only 10 people sent plays in. There were only three spots and I sent two plays in and I didn’t get in at all.”

Dawn Dumont will be doing a public reading of Rose’s Run at McNally Robinson in Saskatoon on Friday, April 10.

She will be joined by Ernie Louttit, author of Indian Ernie: Perspectives on Policing and Leadership, who is also nominated for four Saskatchewan Book Awards. 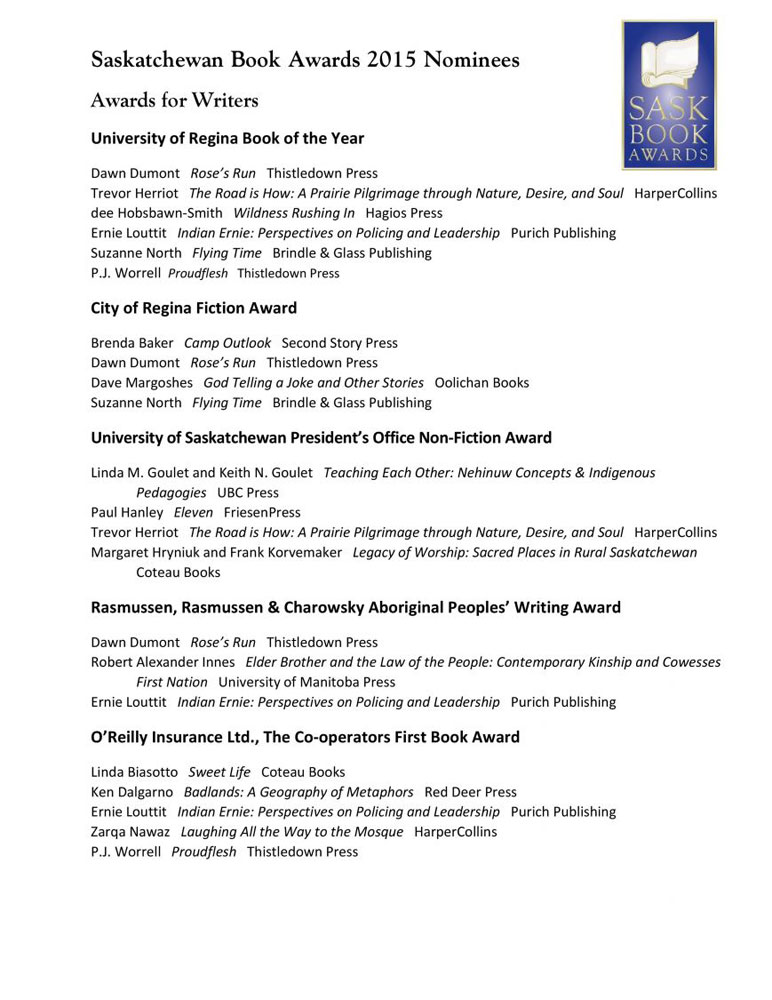