A long awaited Métis art gallery and museum was opened by the artists that fill its walls and likely the most famous bell in Canada. Gabriel Dumont Institute held several days of commemoration around Louis Riel Day by opening their new museum and art showcasing the new Christi Belcourt gallery along with the Olive Dickason room and two other historical spaces meticulously curated by Gregory Scofield.

Also present was Billy Joe Delaronde, liberator of the Bell of Batoche, and the bell herself. The bell went on tour to not only elementary schools, but the GDI Friday receptions in both afternoon and evening, and Batoche Historical Site on Sunday where wreaths were laid in the cemetery. 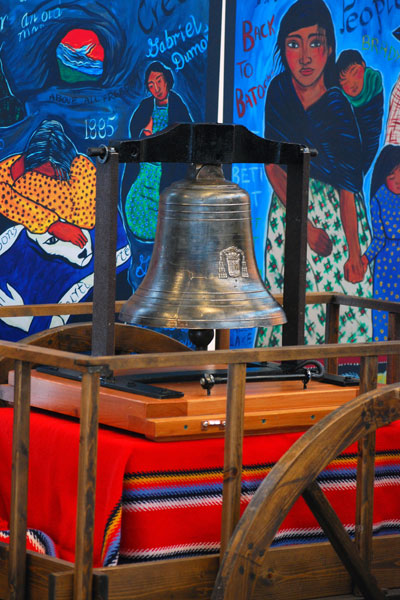 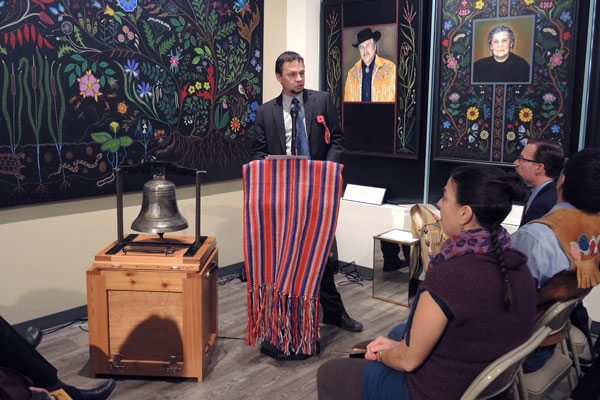 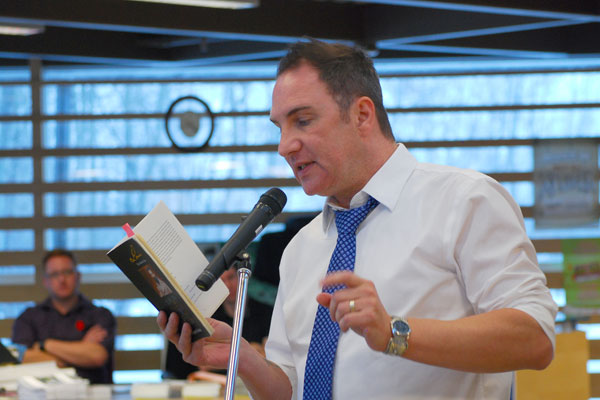 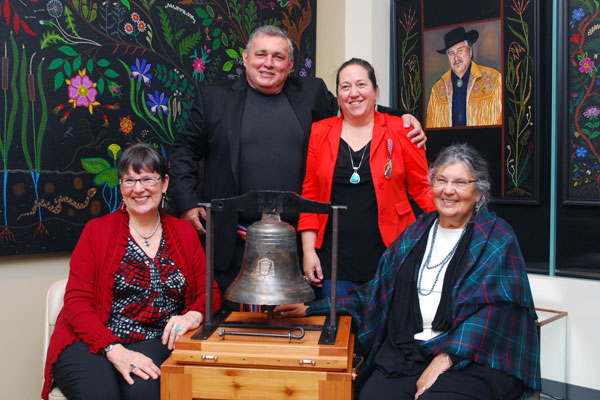 On Friday night Billy Joe told "the real story" of the repatriation of the stolen bell, holding the audience spellbound as he recounted "Métis Mission Impossible" as only a storyteller can. He imagined Gabriel Dumont and Louis Riel nudging one another and saying, "and they thought it was over now, eh?" to laughter and applause from the gathering.

At both events, Gregory Scofield shared stories and poetry, and Guy Freedman presented a speech he'd first given 13 years ago, asking what had changed since Riel was hung. Telling the moving story of a young man who guarded Riel's body from those who peered through the windows of the church amidst footsteps in the night, until he was transported to Winnipeg for burial, Freedman called for a united Métis nation working together for Riels vision of solidarity against injustice.

On Friday, gifted artists Christi Belcourt and Sherri Farrell Racette shared some words about their own journeys, praising the work of GDI, while Maria Campbell read "Joseph's Justice" from Stories of the Road Allowance, and Deborah Lee shared some words about Olive Dickason, historian and leader  Dickason's daughters were among the many honoured guests, friends, and members of the Métis nation.

Sunday's festivities took a more solemn shape, but there was still fiddling by an up-and-comer named DJ Gaudet, and poetry/prayers in both Michif and English by Métis veteran and Elders Edwin and Harriet Oakes-St.Pierre. Donny Parenteau shared his gifts of words and song while spreading his anti-bullying message which he is taking to schools everywhere, along with the song that spreads that vision, "Imagine a World." He also performed a beautiful song written by GDIs own Karon Shmon about the Bell of Batoche, which had come to her when she first heard the news about the bell being returned this past summer.

So, 128 years later, the artists are leading the way, and our spirits have all been awakened.