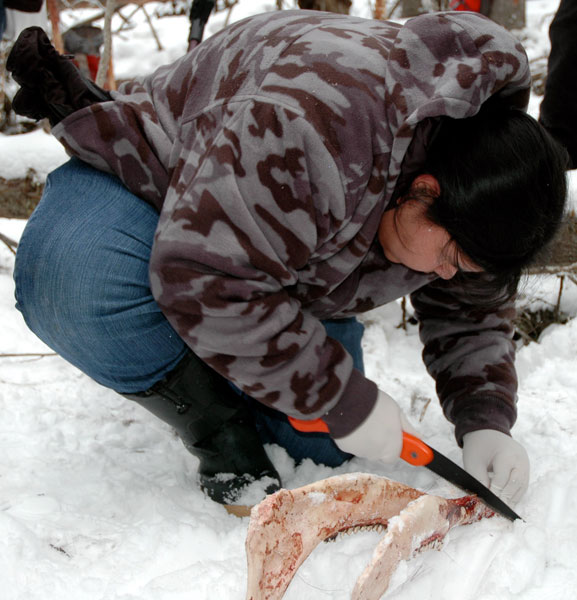 A group of Saskatchewan First Nations high school students had the opportunity to learn about ecology and animal conservation as part of a trip to the Prince Albert National Park in late March.

The 11 youth were from the Ahtahkakoop Cree Nation and Beardy’s and Okemasis First Nation.

As part of the trip, they were taken on a tour of wolf prey sites throughout the park.

Over the course of the past two winters, Parks Canada officials have been tracking the hunting movements of wolves within the park to see what effect this is having on the bison population.

Roughly six wolves in two different packs were initially captured, outfitted with global positioning system collars and then released back into the wild.

Through the GPS collars, park staff is able to track the movements of the wolves via computer.

Seth Cherry is the wildlife ecologist at the Prince Albert National Park who led the trip.

He says they want to show the students what the park has to offer and at the same time teach them about the importance of ecology and conservation.

“The reason we’re interested in bringing youth out is, first of all, to get them out in the park and expose them to some of the research we’re doing and some areas they maybe haven’t seen before,” he says. “But also to teach them about bison conservation and bison ecology. I think a lot of individuals, some members particularly from the Ahtahkakoop First Nation, hunt that bison population so they do have an interest in bison conservation.”

Cherry adds a lot can be learned from examining a wolf prey site.

After a kill, the wolves don’t tend to leave much behind – usually some hair, bones and stomach contents.

At one kill site, the students were part of an investigation of what ended up being a moose.

They examined the rumen (stomach contents) and took samples of both teeth and bones.

The teeth can be used to determine the age of an animal and lipid from the bone marrow to determine how healthy it is or if it is suffering from disease.

Cherry says park officials have noticed over the past decade that the plains bison population has declined by as much as 50 per cent.

In the first winter of the study, he says they tracked nine bison killed by wolves but this past winter just one.

This may have to do with the fact that this year’s winter was milder and with less snow making it more difficult for the wolves to track the bison.

Tim Peekeekoot served as the chaperone for the students from Ahtahkakoop First Nation.

He says the community believes it is important to make the youth aware of the various environmental factors that are playing a role in the bison population and their declining numbers.

“There’s only a few remaining live buffalo in this world and I thought it would be a blessing for them to know this count,” he says.

The youth were also introduced to a Masters student from Germany who is using motion triggered cameras placed at strategic points on the west side of the park to capture images of the wolves to determine more information about their travel patterns and composition of packs.