Oskayak honoured for innovation and excellence in education 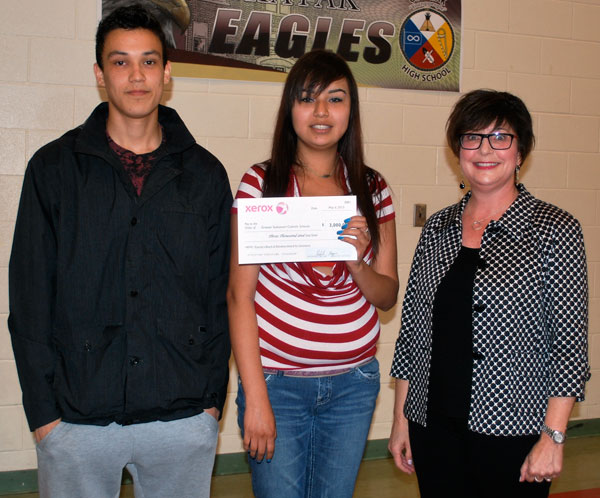 Oskayak High School received a $3,000 cheque from Xerox Canada on May 6 for various accomplishments in the past year.

The Saskatoon school, which incorporates Aboriginal cultural programming as part of its core curriculum, is the 2014 recipient of the Premier’s Board of Education Award for Innovation and Excellence.

Because of its cultural programming, Oskayak continues to see increased enrolment, course completion and graduation rates.

The school has gone from about 175 students a few years ago to roughly 325 today.

Its current credit achievement rate is also about 81 per cent.

Six years ago, Oskayak was graduating as few as three students and this year it expects to graduate 62 giving it a higher graduate rate than most other schools in the area.

Ashley Severight and Keanu Phillips are Grade 12 students at Oskayak.

Severight says Oskayak is a great place to go to school.

“I like going to school because of the environment and the culture, how we smudge everyday and the people,” she says. “It’s just a good environment to be around, it’s like a second home for me.”

Phillips adds the strong support of teachers at the school has helped him to achieve academic success.

“I started this year off with credits I didn’t think I was going to be able to graduate with but, with all the teachers’ help, now I’m graduating this year and able to attend university in the fall,” he says.

Nicole Isabelle is the vice-principal at Oskayak High School.

She says the school is constantly looking at ways to improve the academic achievement of its students.

“The infusion of technology and culture, the hardworking staff, always looking for ways to engage the students and credit completion – diligently working on that.”

Isabelle says the money from Xerox will likely go toward technology improvements and other cultural supports.

The cheque from Xerox was presented at Oskayak’s spring awards assembly.

The award is based on the five criteria of innovation, sustainability, cost/benefit analysis, evidence of improvement and graduation rates.