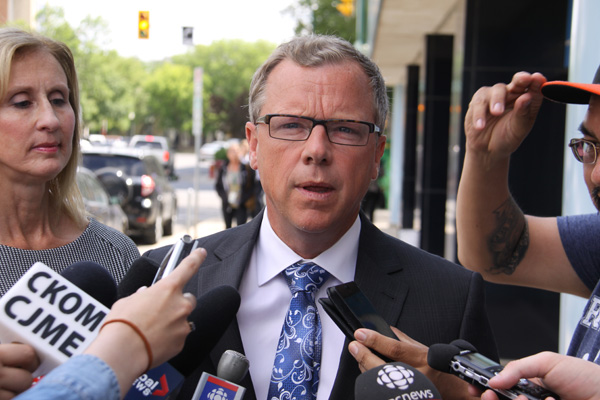 Premier Brad Wall has announced that his caucus has agreed to make a formal apology to victims of the Sixties Scoop, but not until later this summer or in the fall.

“I was really moved by the story told by President Doucette. He also said that an apology would mean a lot to him. That is why the caucus has agreed to do a formal apology for the so called 'Sixties Scoop,'” said Premier Wall at a media scrum outside of the cabinet office in Saskatoon. “We will engage our appropriate ministers from Social Services and from First Nation and Métis Relations and myself including First Nation and Métis leaders from the province to make sure we do it right. We want to discuss how we can formally offer it and that the apology is freely offered and freely received and accepted as well.”

The province of Saskatchewan has been under pressure to apologize for their social services policy in the 1960’s and 70’s that saw social workers scoop thousands of children from their families to be adopted out or placed in foster homes around the world. The Province of Manitoba recently apologized for their involvement and recently there were calls from NDP Leader Cam Broten and Métis Nation-Saskatchewan President Robert Doucette for Saskatchewan to follow suit.

There is lots of work to be done before the apology, as Wall admitted this was so new that he hadn’t had a chance to inform FSIN Acting Chief Kim Jonathan or Métis Nation-Saskatchewan President Robert Doucette.  In the mean time, Premier Wall noted work that had been done around this issue.

“We have been working on regulations around adoption, for example, that makes it easier for people to find their birth parents. Our government also introduced in 2007 mandatory curriculum on treaty education for K-12 students. Of course the residential school situation is dealt with in that curriculum but not a lot of people know about the so called 60’s scoop. That’s another change we can make,” said Wall. “But we want to do this in consultation with the FSIN and Métis Nation. We want to make sure the apology is meaningful and if there are other things we can work on.”