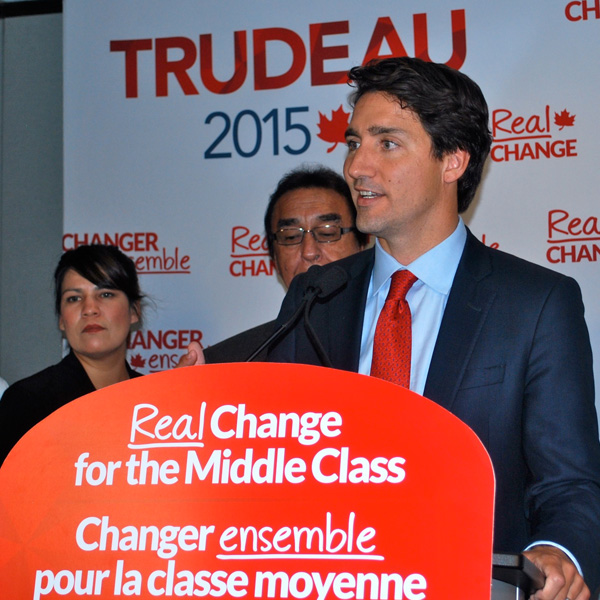 Liberal leader Justin Trudeau at a campaign stop in Saskatoon.

Liberal Leader Justin Trudeau says if elected his government would make up for “ten lost years for Aboriginal people” under the Conservative government.

Trudeau was in Saskatoon on Thursday August 13 as part of a short election campaign tour though Saskatchewan.

At a rally with about 400 people in attendance, the Liberal leader announced his party’s plan to address the current federal funding gap in First Nations education.

Trudeau says a Liberal government would invest $2.6 billion over four years in First Nations education to narrow the funding gap.

A Liberal party press release says this would be an additional $325 million per year for on-reserve education compared to what the Harper government has already pledged.

The Liberals also say they will invest $500 million over the next three years to address immediate First Nations education infrastructure needs and add another $50 million per year to the Post-Secondary Student Support Program (PSSSP) to help Indigenous students in gaining access to universities and colleges.

Over the course of an hour-long address, Trudeau stressed the need for the federal government to rebuild what has become a fractured relationship with Aboriginal people under the Conservatives.

He says a Liberal government would take “nation to nation” approach in dealing with First Nations governments as part of rebuilding this relationship.

“Canada has failed the First peoples by not respecting the principles and spirit of the Royal Proclamation,” the Liberal leader says.

Trudeau’s speech was followed by a short town hall where he fielded questions from the audience.

During the town hall, the Liberals support of the Harper government’s controversial Bill C-51 anti-terrorism legislation came up.

The Liberal leader says his party has tried to fall somewhere in between the “polarizing” approaches to anti-terrorism of the Conservatives and NDP.

Trudeau says Prime Minister Stephen Harper has tried to scare Canadians into believing “a terrorist is hiding behind every rock and tree” while NDP Leader Thomas Mulcair has tried to argue Bill C-51 will “rip up the Canadian Charter of Rights.”

He says neither stance is true and the Liberals have tried to find a balance between protecting the safety of Canadians while ensuring their civil rights.

As he has repeated at various campaign stops, Trudeau told the audience “I am not the only choice to replace Stephen Harper but I am the best choice.”

He says Trudeau is taking the right approach to First Nations education.

“First Nations have been calling for this for many years. It is an investment in our children for the future.”

Earlier in the week, the Liberal leader made stops in Regina, La Ronge and Meadow Lake.

Prime Minister Stephen Harper was also in Regina on Thursday.