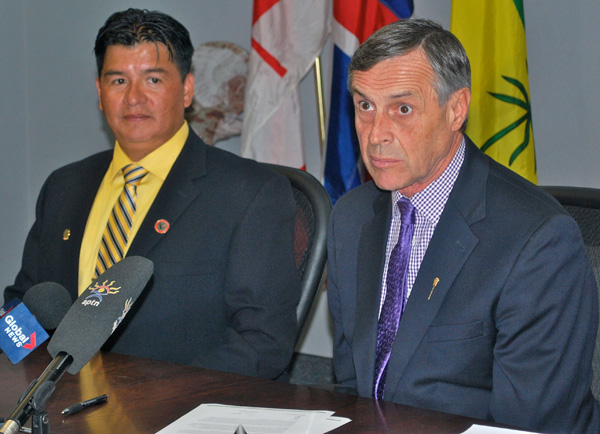 The Federation of Saskatchewan Indian Nations and provincial government have signed a memorandum of understanding that recognizes education as an inherent treaty right.

The agreement recognizes jurisdictional control of education falls under the authority of each elected chief and council in a given treaty territory.

Saskatchewan Minister of Education Don Morgan says although funding for on-reserve education is a federal responsibility, there are areas where the province and First Nations governments can work together to improve educational outcomes for Indigenous students.

He notes the early learning program with Whitecap Dakota First Nation, invitational shared services agreement with the Prince Albert Grand Council and the Microsoft software licensing agreement, which covers both on and off-reserve schools, are a few examples where both governments have successfully collaborated together.

“As a province, we don’t want to invest capital in bricks and mortar on-reserve. But we’ve got a number of programs that function on-reserve and to the extent that we can partner with chief and council, and FSIN, we want to do that.”

FSIN Vice-Chief Bobby Cameron adds that by working together, the province and Indigenous governments are helping to improve on-reserve graduation rates.

He points out Grade 12 graduation numbers from provincial on-reserve schools have increased from about 600 students in 2012 to roughly 750 this year.

The Harper government’s controversial Bill C-33, First Nations Control of First Nations Education Act, currently sits in limbo after failing to gain the support of a number of elected chiefs across the country.

The bill proposes $1.25 billion over three years for First Nations education beginning in 2016.

Former Assembly of First Nations Chief Shawn Atleo, who supported a revised version of the bill, resigned over the dispute.

At an election campaign stop in Saskatoon on August 13, Liberal Leader Justin Trudeau said his party would commit $2.6 billion over four years to First Nations education if elected to government.

In 2009, the Grade 12 graduation rate was 72.3 per cent for all students in Saskatchewan while only 32.7 per cent for Indigenous students.

The education memorandum of understanding does not add any new funding to the $6 million the province already commits to on-reserve schooling.

It was signed at the FSIN’s Saskatoon offices on Wednesday, August 26.