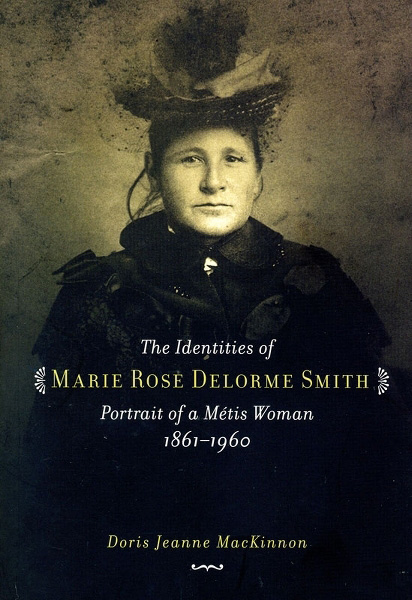 Doris Jeanne MacKinnon’s The Identities of Métis Rose Delorme Smith: Portrait of a Métis Woman is an incredible story of a seemingly ordinary woman who lived a remarkable life spanning nearly a century, from 1861 to 1960.

In an era when ordinary women often remained unknown, what sets her apart? She lived at a time and place when significant western Canadian history was being made and personally knew many of the historical personalities of the time. She was also well-educated and literate, rare for a Métis woman of that period, and recorded her experiences in a diary.

It’s incredible that she overcame all the hardships she did – surviving whooping cough as a youth, being “traded” in 1877, at age sixteen, to a white man more than twice her age for $50, giving birth to seventeen children, and losing two sons in the First World War.

According to Marie Rose, her arranged marriage was the result of a misunderstanding. When Charlie Smith, a wealthy whisky trader, grabbed hold of her and said something she didn’t understand, she cried out, “Yes, yes, let me go!” Charlie then kissed her, and his marriage proposal was sealed. That was the extent of their courtship.

Together, they built a little house on the prairie and took up ranching at Pincher Creek in southwestern Alberta. At her Jughandle Ranch, Marie Rose entertained such personalities as Koutenai Brown and Colonel James Macleod. She personally knew many of the prominent people of that period – Louis Riel, Gabriel Dumont, Father Lacombe, and Frederick Haultain.

Speaking at least three languages, she was an entrepreneur and business woman, making elaborate beadwork and earning the nickname “Buckskin Mary.” She also used natural remedies and worked as a midwife until the medical profession forced her to stop.

Her historical articles in Canadian Cattlemen provide a window to the past, as the West transitioned from the freewheeling days of hunting buffalo to the more sedentary settlement period. In the course of writing both history and fiction, she herself made history.

MacKinnon tries to determine the ethnic identity of Marie Rose, no easy task since she didn’t directly identify herself as Métis. Various census records list her as French or English or “white.” Her husband was a member of the Rocky Mountain Rangers, organized to stave off attacks during the North-West Rebellion, and Marie Rose may not have wanted to align herself with the losing side by identifying herself as Métis.

MacKinnon demonstrates how a seemingly ordinary woman can lead a remarkable life, not only witnessing and recording history, but also playing a role in its making. In addition to being an intriguing story of an ordinary yet remarkable woman, MacKinnon’s book adds to our knowledge of Aboriginal and Métis people, and in particular to women’s history in western Canada.

This book is available at your local bookstore or from www.skbooks.com.