A woman from Beardy's and Okemasis who is a tireless advocate for Indigenous women's rights has been shortlisted in a competition that celebrates the "unsung heroes of Canadian democracy."

Darlene Okemaysim-Sicotte was one of more than 200 Canadians who were nominated across 125 Canadian ridings for the Everyday Political Citizen contest. From those nominations, 14 prominent Canadians chose the 13 adult finalists and 8 youth finalists. On February 3, one adult and one youth winner will be announced.

Okemaysim-Sicotte says she is pleased and excited to make the shortlist and looks forward to getting to know the others.

"We're all dedicated. We all love what we're doing, and we all love people," she says. "And, we feel we have a responsibility" to make a difference and show that every day people can do something.

Okemaysim-Sicotte is well-known for her efforts to help families of missing and murdered Aboriginal women. She has organized rallies, vigils, and educational sit-ins to help raise awareness of the issue, and she is co-chair of Iskwewuk E-wichiwitochik (Women Walking Together), a group of concerned citizens who came together in 2005 to bring more attention and support to the issue. 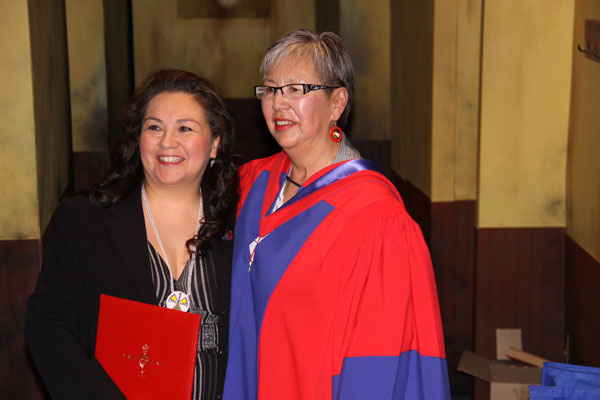 Darlene Okemaysim-Sicotte with Senator Lillian Dyck when Darlene was presented with a Queen's Jubilee Medal.

She is especially pleased that the juror who chose her, who has a background in pharmaceuticals, "totally got it" that Indigenous women are marginalized, and she says making the shortlist will help her spread that message.

"The more I am able to plant the seeds and raise awarness about missing and murdered Aboriginal women, I'll take it," she says.

Okemaysim-Sicotte credits her parents with her drive and desire to help people because she was raised in a way "to bring compassion and unity" to others around her.

She was unaware she was being nominated by Kevin Seesequasis, who says her work on the issue of missing and murdered Aboriginal women has resulted in "significant awareness and understanding locally and provincially.

"I am proud of the work that Darlene has done and continues to do through her advocacy and volunteer efforts - she is an exceptional Indigenous Cree woman and very worthy of receiving this recognition," Seesequasis wrote in his nomination.

For the full shortlist of nominees, visit the Samara Canada website.