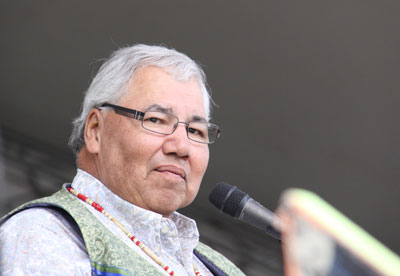 Justice Murray Sinclair, one of Canada's most esteemed legal scholars

Murray Sinclair wants the legal profession to know that Indigenous law has a long and established history in Canada, longer than Western law in fact.

Justice Sinclair was one of the keynote speakers at the Canadian Institute for the Administration of Justice Annual Conference in Saskatoon this October.

The theme of this year’s conference is Aboriginal Peoples and Law: “We Are All Here to Stay.”

Sinclair is one of the country’s most esteemed Aboriginal legal scholars. He was Manitoba’s first Aboriginal judge and served as the co-commissioner of Manitoba’s Aboriginal Justice Inquiry.

Sinclair also wrote the Report of the Pediatric Cardiac Surgery Inquest, which examined the deaths of 12 children in the pediatric cardiac surgery program at Winnipeg’s Health Sciences Centre in 1994.

More recently he served as the chair of Canada’s Truth and Reconciliation Commission.

He says it has been a long-standing Western myth that Aboriginal people did not have established property rights, which is blatantly false.

“I’ve always chafed a bit at the dominant theory that’s held by white legal authorities who say that Indians had no knowledge, no tradition of owning property,” Sinclair says. “To which I’ve always wanted to say out loud, ‘bullshit.’ Because the reality is that you owned things, you owned your weapons, your teepee, your property – you owned the things that you’d earned. They belonged to you and no one could take those things away from you. You owned the territory that you occupied, it was your land, your property, and therefore anybody that interfered with that would suffer the consequences. So, ownership of property was a very dominant feature of all Indian societies long before Europeans came here.”

Sinclair also says there are a lot of existing myths as to how oral history actually works.

In Western knowledge, there is the misguided belief that oral history is a single interpretation of an event that gets passed on from generation to generation which therefore heightens the chance of inaccuracies as the story gets further and further away from its original source.

However, he says this is false.

Sinclair says oral history involves a group of people participating in the held beliefs of how an event occurred until consensus is reached. “At the end of that dialogue there would be a consensus within the room that everybody agreed that now we have all spoken,” he says. “That’s our history or that’s the history of that event. We all agree that’s history. That’s how oral history works in Ojibway tradition.”

Overall, the Truth and Reconciliation Commission head says both law schools and the legal profession as a whole need to be incorporating Indigenous law into their programming if they want to better relate to Aboriginal people.

“It will be a lot of work to make the changes that are necessary. It begins by the way we change teaching of law in the law schools and for those who are currently practicing law, it also calls upon us to ensure that the professional development programs that are in place by the law societies are also amended in order to reflect more of this understanding than has been the case to this point in time.”

The Canadian Institute for the Administration of Justice was a three-day conference.