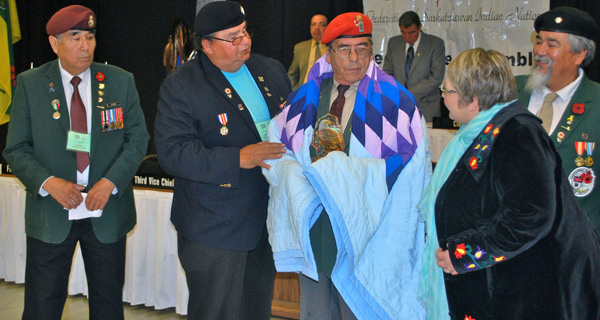 Rocky Redwood receives an award and ceremonial blanket for his work on behalf of the Saskatchewan First Nations Veterans Association as Emil Highway (far left) and Vice-Chief Heather Bear (far right) look on at the fall legislative assembly of the Federation of Saskatchewan Indian Nations in Saskatoon on October 28.

Veterans, both Indigenous and non-Indigenous, had at times a tense relationship with the previous Harper Conservative government.

They were not happy when the Conservatives decided to close eight Veterans Affairs offices across the country, including in Saskatoon, in early 2014.

Not long after, Veterans Affairs Minister Julian Fantino was forced to apologize after showing up more than an hour late for a meeting in Ottawa with veterans, getting in an argument and then abruptly leaving.

Emil Highway is the president of the Prince Albert branch of the Saskatchewan First Nations Veterans Association.

He says the association is hopeful the Liberals will re-open the Veterans Affairs office in Saskatoon.

“Any help that a veteran can get, because most of them are retired, they live on a fixed income and they can’t really travel long distances and pay for gas and hotel rooms and so on,” Highway says. “So, when they closed that office in Saskatoon that was another hardship that veterans had to endure, in particular Native veterans.”

The First Nations Veterans Association has an active membership of about 150 across the province.

In the new year there are plans to work with the First Nations of University of Canada in Regina to put in a place a display that recognizes the contributions of Indigenous veterans and erect a monument for the same purposes at Wanuskewin Heritage Park outside of Saskatoon.

Aside from these plans in the near future, Highway says there is always the long term plan to get the federal government to formally recognize the contributions First Nations veterans have made to Canada’s military efforts while at the same time acknowledging they did not receive the same benefits as non-Aboriginal veterans.

He says he met new Prime Minister Justin Trudeau at an event in Wainwright, Alberta a few years back, they discussed various issues and Highway believes he had Trudeau’s ear.

“Hopefully he (Trudeau) remembers what we spoke about in Wainwright and that his government will at some point acknowledge the contributions that First Nations veterans made in the armed forces in the most violent century known to mankind which was the twentieth century. A lot of Native men died overseas and hopefully this Liberal government will in some way acknowledge that.”