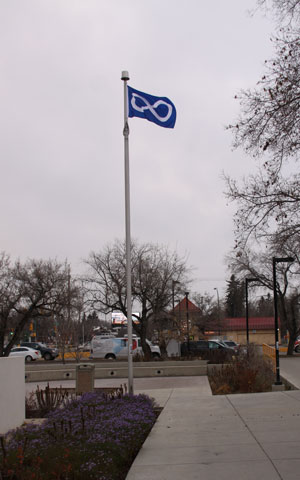 It was an emotional and historic morning at the Saskatchewan Polytechnic Saskatoon campus.

People gathered for the raising of the Métis flag to honour Louis Riel on the 130th anniversary of his passing. As the flag was raised, the St. Michaels student choir, each adorned in a Métis sash, sang the Métis National Anthem.  Afterwards, all of the St. Michaels 165 students gathered in the Polytech foyer to sing the Anthem again.

A similar event happened at the three other Polytechnic campuses in Regina, Prince Albert and Moose Jaw where they too raised the Métis flag, all concurrently at 9am.

Raising the Métis flag is rather new to the campuses, but this small step of recognizing Aboriginal people and history ties into the big step the school has just taken with the approval of an Indigenization Declaration. To Jason Seright, director Aboriginal Strategy at Saskatchewan Polytechnic, many small steps can lead to big changes on the campuses across the province. 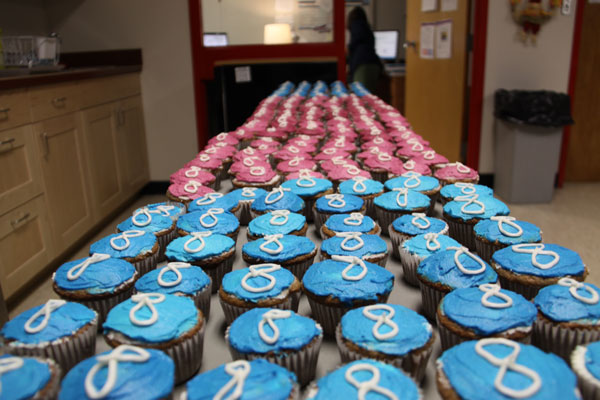 This is all great news to Brian Gallagher, Aboriginal Student Advisor at the Saskatoon campus. He has been employed there for 28 years and the Indigenization movement and events like raising the Métis flag have come from lobbying by employees just like Brian.

“Twenty-five years ago I never would have imagined this happening in Saskatoon. We are very privileged. To see the kids involved and the staff and students is very uplifting. Gives me lots of energy to go on and keep working for these kinds of things. It was heart warming and very emotional out there as the kids were singing and also in the building,” said Gallagher. “Being a Métis person growing up in Saskatoon I could never imagine anything like fiddling or drumming in an elementary school let alone a post secondary institution. That used to be the furthest thing from my mind that we could hear this music and the lessons included in them but the evolution is fabulous and it shows the progress of the growing Aboriginal population in Saskatchewan.”

Saskatchewan Polytechnic has 3,490 Aboriginal students – more than any other post-secondary institution in Saskatchewan. The organization has made significant progress in including Aboriginal content in several programs and aspires to indigenize its curriculum on a broader scale.

And Jason Seright, also a Saskatoon raised Métis who has seen the changes in the province, believes it is all a good thing. 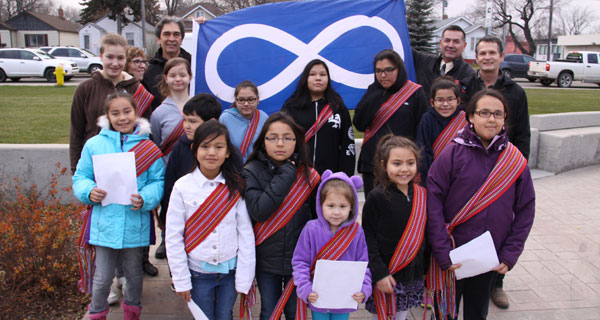 “The whole flag raising ceremony ties in with what we are doing with Aboriginal teachings and incorporating it into our institute. We didn’t do this a lot in the past but over the last few years we are seeing change,” said Seright as he dodged St Michael’s students who were focusing on their Métis flag cupcakes. “It was touching to have 165 students from St Michaels who, when they sang the part of the anthem where they say “Proud to be Métis,” that part just picked up. It wasn’t always the case in Saskatoon. I remember going to school at Father Vachon and not having any Aboriginal role models. Yet I see this school and they have Aboriginal teachers and role models and they come over here and see some of our students. It is a great thing. It is very emotional and something that has been a long time coming. I am glad we are finally at that point where we are embracing it as an institute.”