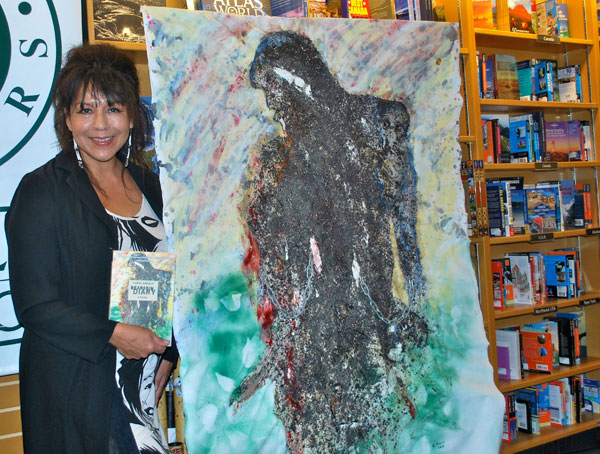 Carol Daniels seen here at McNally Robinson Booksellers in Saskatoon beside her art work “Stealing the Light,” which is also on the cover of her new book Bearskin Diary.

Like many journalists, Carol Daniels dreamed of one day writing a novel.

However, in need of a steady income to support a family, that time seemed to be always getting pushed further and further back until one day six years ago everything changed.

She was working as a news anchor for CBC television in Yellowknife when one of her close friends suddenly passed away.

“He would talk about when I retire in two years, ‘we (he and his wife) want to do this with our backyard, we are going to add this on to the house…’” Daniels says. “All of these plans and they had this list of things they were going to do, and he was so excited about being able to do these things on his list, and then he died in 2009, just died. So, he never got to do all those things on his list.”

Daniels quit her job shortly after to become a full time writer and she would eventually move back to Saskatchewan.

The novel follows the life of its main character Sandy Pelly who is one of tens of thousands of First Nations children taken from their parents at birth by the federal government and placed in largely non-Aboriginal homes in what is now known as the 1960’s Scoop.

Set in Saskatoon, it follows one very significant year in Sandy’s life that changes her personal circumstances forever.

A portion of the book takes place in a newsroom and the dark secret of the Saskatoon police’s “Starlight Tours” and the issue of missing and murdered Indigenous women also play parts.

Daniels says Bearskin Diary is fiction and not autobiographical – “I don’t think I am that interesting,” she jokes.

However, she says there are certainly parts of the novel where the main character experiences the frustration of trying to preserve one’s culture and dignity while attempting to make her way in a white-dominated world that she also relates to.

“A couple of things I’ve talked about, like trying to scrape off the brown, I actually remember doing that when I was a kid. So, I put that in there because I’ve had conversations with other kids who’ve been scooped up who said, ‘Oh my God, I did exactly the same thing.’”

Daniels is just one of a number of Indigenous writers, many of whom are both female and from Saskatchewan, to produce their first works over the past few years.

She says right now is certainly a great time to be an Aboriginal artist.

“I think there is an ebb and flow of interest in our community on behalf of the larger population where you will have a pronounced interest, in our issues in general, and then it goes away and then it comes back. The last time there was a pronounced interest was around the time of Oka (crisis, 1990) and that was also the time when Elijah Harper stood up with the eagle feather (in the Manitoba Legislative Assembly to protest the Meech Lake Accord in 1990) and then it kind of went away and now it’s coming back again. So, I think it’s a really great time for Indigenous artists. It doesn’t matter what your discipline is, to make those political statements.”

Bearskin Diary is published by Nightwood Editions and available in Saskatoon through McNally Robinson Booksellers.

Carol Daniels is also a visual artist, poet and musician.

She was the first Aboriginal woman to anchor a national newscast when she joined CBC Newsworld in 1989.