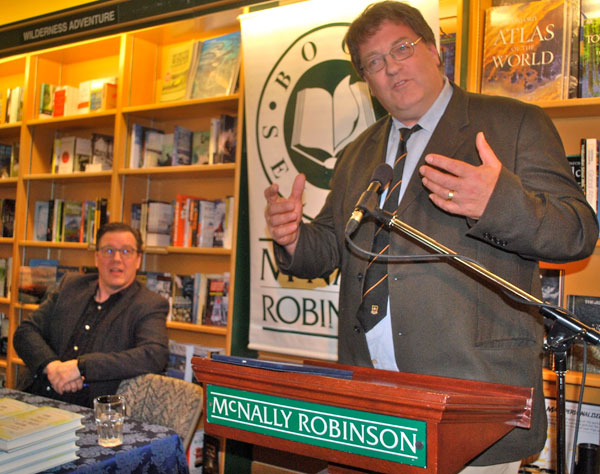 Ken Coates (right) and Greg Poelzer (left) at the launch of their new book From Treaty Peoples to Treaty Nation: A Road Map for All Canadians.

Ken Coates and Greg Poelzer want to provide a road map to Canadian governments on the dos and don’ts in terms of living up to the spirit of the treaties with Indigenous people.

The ideas of the University of Saskatchewan professors are put forth in a new book called From Treaty Peoples to Treaty Nation: A Road Map for All Canadians.

The two academics have been crossing paths for more than 20 years while working on various Aboriginal research projects and thought now would be a good time to put some of what they have learned into a broad set of written guidelines.

Poelzer and Coates are both members of the International Centre for Northern Governance and Development at the U of S.

They are also faculty members of the Johnson-Shoyama Graduate School of Public Policy.

Coates says while the book is certainly an academic one, they hope it will have applications well beyond the confines of the university.

“We also wanted a book that would really challenge policy makers, government officials and politicians to think more creatively,” he says. “So, ordinarily academics will often shy away from some of their policy suggestions. We are both in the Johnson-Shoyama Graduate School of Public Policy where we all live in a world where we want to make policy suggestions and so we think the outreach part of this is let’s rattle the cage a little bit, let’s be creative in a positive sort of way.”

Poelzer says perhaps the biggest mistake governments have made in terms of living up to their treaty obligations is trying to draft and implement policy that affects First Nations communities using a top down fashion.

“Come out without consulting people, that usually doesn’t work and you can’t get away with it nowadays,” he says. “I mean, you look at the (Liberal) White Paper, 1969, as an example.”

Coates also says while governments in Canada have failed in terms of providing the same quality of services and infrastructure to Aboriginal communities as compared to non-Aboriginal ones, the situation is quite the opposite in countries like Norway.

“You have places that have a northern area, you have isolated Aboriginal communities, predominantly Indigenous populations in these areas and they have the same roads and the same schools. They have doctors who choose to live in communities of 1,000 people. Not ones who fly in at $400,000 a year to come in once every couple of weeks and do something.”

From Treaty Peoples to Treaty Nation was officially launched on November 30 at McNally Robinson in Saskatoon.

It is published by University of British Columbia Press.

Related story: Book Review: #IdleNoMore: And the Remaking of Canada by Ken Coates