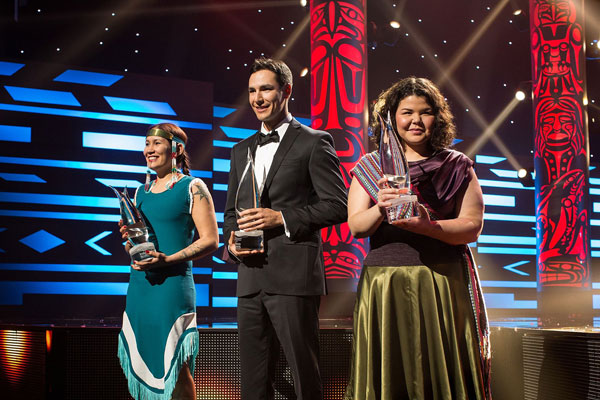 It is said that the Indspire Award is the “most prestigious” award that an Indigenous person can receive for their achievements. So naturally, I was floored and humbled last August when I got the call I was the Métis youth recipient. The show took place in February at the Queen Elizabeth Theatre in Vancouver. The theatre was packed and the schedule was tighter. Each of the award recipients went through a dress rehearsal so we were prepared for the fast pace of the 2-hour show.

Chief Robert Joseph received the Lifetime Achievement Award. He has a revolution of love that we all need to carry on. Even though he was badly beaten in residential school, he blamed himself and carried pain that led him to alcohol abuse and a self-destructive lifestyle until one day he had enough. He knew that he needed to search within the smallest sources of hope and he has made a tremendous difference in many peoples lives by spearheading reconciliation in Canada.

Joseph Boyden received the Arts award and it was such a proud moment watching him celebrate his achievements through his inner child – you could see him smiling from within as he stood next to Clint Davis on the rising platform and their very large trophies tightly gripped.

Clint Davis received the Business Award and rightfully so. He went from Nunatsiavut to Goose Bay and now works on Bay Street in Toronto as a Vice President in Aboriginal Affairs for TD Bank. He has built his career based on his own vision and never let go of who he was raised to be.

Elder Mae Louise Campbell and Chief Jim Ochiese received the Culture, Spirituality and Heritage Award. Elder Mae Louise Campbell is a champion in leading Indigenous people to a journey of healing and re-discovery of our traditional roles in community. She is the Elder in Residence at University of Manitoba’s Faculty of Social Work, Red River College, and at Coady Institute’s International Centre for Women’s Leadership in Antigonish, Nova Scotia and part of the Task Force for Sex Trafficking on Canadian Girls. She has been the Keeper of the Grandmother Moon Lodge and successfully advocated for Manitoba’s Sexual Exploitation Strategy, Tracia’s Trust.

Chief Jim Ochiese is a great-grandfather, ceremonial leader, Chief, environmentalist, botanist, forester, medicine person and teacher. He gently leads people from all walks of life to an understanding that we are all connected, something he believes is universal knowledge.

Pat Mandy received the award for Health. She is a retired Health Care extraordinaire from the Missisaugas of New Credit First Nation. She worked for over 25 years in building a responsible health authority that valued the community it worked for. There is now an award in the community called the Pat Mandy Award. It is given to one person who exemplifies values of respect, caring, innovation and accountability and also proves their understanding, mutual respect and dignity for all individuals. Mark Stevenson received the award for Law and Justice. It is a great opportunity to meet him and put a face to the countless readings of land settlement agreements. That’s where he comes in. He is a Chief Treaty Negotiator in B.C and also works for First Nations and Metis organizations in matters related to Conflict Management, Constitutional Development, Governance, Natural Resource Law and Economic Development.

Michael Kanentakeron Mitchell received the award for Politics. He was the Grand Chief of Akwesasne for over 30 years and through the toughest times he led the geo-politically marginalized reserve to a self-governing nation built on traditional Haudenosaunee governance and modern democratic systems of governance. We could all learn from a visionary like him.

Leonard George received the award for Public Service. He was Chief of Tsiel Waututh for 12 years, was an advisor for the United Nations to advocate for Indigenous people around the world and he executed his visions based on the belief that Indigenous people must become “modern-day hunters through education. Degrees, diplomas, and technical trades are the tools that will allow us to grow into the future.”

Carey Price received the Sports award. His mom, Lynda Price, came in his honour as he is healing from injuries. He is the goaltender for the Montreal Canadiens, a widely celebrated hockey star amongst all Canadien fans but also amongst many Indigenous youth with dreams of making it to the big leagues. Price believes in providing healthy meals for children so they can learn properly and advocates for accessible nutrition through the Breakfast Club of Canada. He dedicated his Vezina award to Indigenous youth saying, “be proud of your heritage and don’t be discouraged from the improbable”.

Laura Arngna’naaq received the Inuit youth award. She is from Baker Lake, NU and moved south to study Business and found that Chartered Accountants aligned with her aspirations. She excelled in the field and now works for Habitat for Humanity. She is also building her very own canoe.

Now, for the Saskatchewan recipients and we’ll start with Jo-Ann Episkenew. “She was everyone’s boss and never acted like it even once” said one of her employees who reminisced on the lessons she learned from Jo-Ann. She single handily raised over $1M for Indigenous arts in Education for Saskatchewan. She was the Director of the Indigenous Peoples’ Health Research Centre and led a team that she deeply believed in. She changed the way her students see themselves as learners, as scholars and as people. Jo-Ann passed away on February 17th. She leaves a legacy that is left to the hands of the hundreds of people she inspired and guided to do great things.

Last year, Jo-Ann received the Lifetime Achievement Award for the Women of Distinction Awards in Regina and in her acceptance speech, she said: “I thank all of you for recognizing me and the little bit I try to do to make my children proud and my grandchildren proud. And hopefully when I leave this world, it will be a better place than when I started.” This is something we are going to have to ask ourselves. But, what is certain is that our world is better because she was here.

Christian Kowalchuk was awarded the First Nations Youth Award. He is a volunteer coach for the Arkansas Razorbacks. He was raised by his father in Saskatoon and started playing baseball when he was 10 years old. He is a left-handed pitcher who learned early on that this was the game for him. He graduated from University with an Economics Degree and a Masters Degree in Physical Education. Christian graduated from Holy Cross High School and gained a scholarship at Seward County Community College where he played for the Saints. He was awarded Conference Freshman of the Year and Conference All-Star of the Year. Not a bad start for a First Nations boy from Saskatchewan – just imagine the possibilities.

Zondra Roy (me!) was awarded the Metis Youth Award. I’m a 3rd year student in SUNTEP, a Teaching Musician for the National Arts Centre’s Music Alive Program, a co-founder of Write Out Loud: Building Community through Spoken Word and an active member in Saskatoon. People call me Zoey and I have lived on both sides of the system and believe the best way to rebel against it is to succeed. With the trust and patience of many organizations, teachers and youth workers, I began finding my calling as a messenger. I am a spoken word poet and use my gifts to help others find their voice.

“The 2016 Indspire Awards recipients personify the successes Indigenous people have achieved and the significant impact we have made in all areas of life in Canada,” said Roberta L. Jamieson, President and CEO of Indspire and Executive Producer of the Indspire Awards. “We also salute the future, through our three youth recipients, each of whom serves as a role model, inspiring young Indigenous people across the country.” The 2016 Indspire Awards was an amazing celebration – if you see yourself in any of these people, hold on to that. If you want the award too then make it happen – they did.