Gerald McMaster examined “Indigenous Views of the Other” at a public lecture Monday April 18th, sponsored by Remai Gallery. EFN caught him marking papers for OCAD, where he is a professor and Canada Research Chair, and spoke to him beforehand. 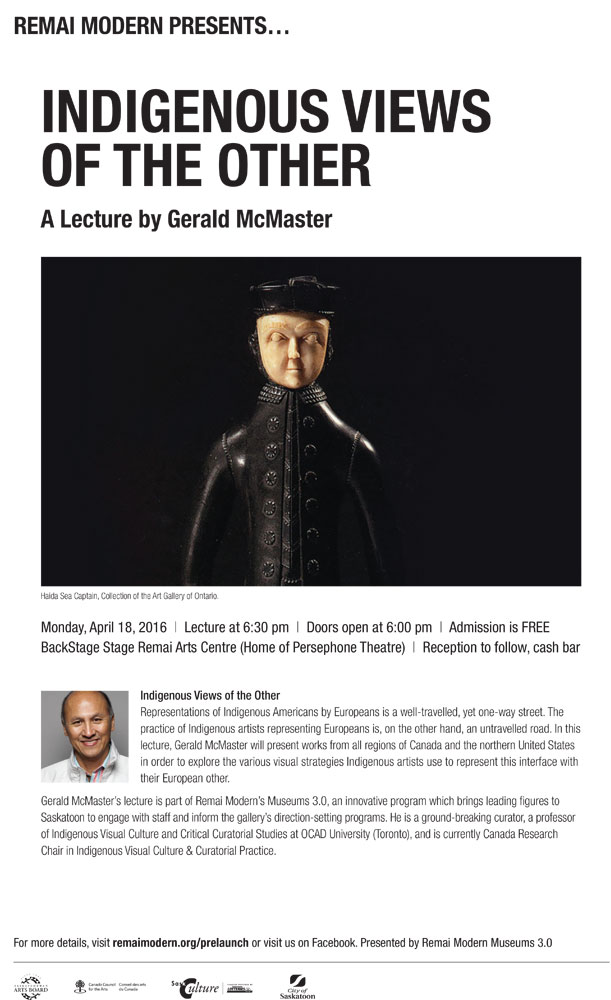 “It's going to be good to get back. I was born and raised at Red Pheasant just south of Battleford,” said McMaster, adding he was schooled at Red Pheasant and in the Battlefords before living a year in Saskatoon, then going to school and working in the US. “I've been mainly in the East since 1981, both Ottawa and Toronto.”

He has noticed Indian country is used to being looked at in various representations.

“Whether they make us look great or make us look bad, when we are represented in different ways, it's really without our voice. So over the last dozen years I’ve been interested in the topic of the reverse gaze: how have we looked at the Other?”

He’s researching how Indigenous artists depict Others: Europeans, Euro-Canadians, or Euro-Americans. Most artworks remain in private collections, so he has worked hard to unearth them.

“Inuit, the Northwest coast, the Plains, here in the East - Indigenous people have viewed European or the Other in very different ways.”

His lecture examines how we represent our relations and our actions with the Other.

“When I was a little boy and first came into town off the reserve and the little white kids were calling us Indians, we'd look around and go what are they talking about? They were being racially prejudiced against us — they put up a mirror but it was a mirror of their own production.”

These mirrors, filters, perspectives, and points of view are what fascinate him. On the West Coast where there was a lot of trade, one piece reminds him of a horizontal totem pole depicting sea culture: boats, sailors, exotic animals, mustaches, sideburns, and hats. In the prairies, the focus changes.

“You see that struggle for space because Europeans were coming in and decimating the buffalo, searching for gold, railways were pushing Indigenous people aside,” noted McMaster. Indigenous resistance shows itself in the artwork: warriors on horseback, counting coup, battles, or horse stealing. “It’s vastly different from the West Coast because the kind of relations were different.”

One of the earliest pieces was Inuit depiction of Norsemen from the 1300‘s.

“This is the research I've been doing, what I want to represent,” McMaster noted, adding the interest sparked often leads to discovering new works. “What we're often used to is depiction of us, but not the other way, so my research works in presenting more of that from our point of view.”